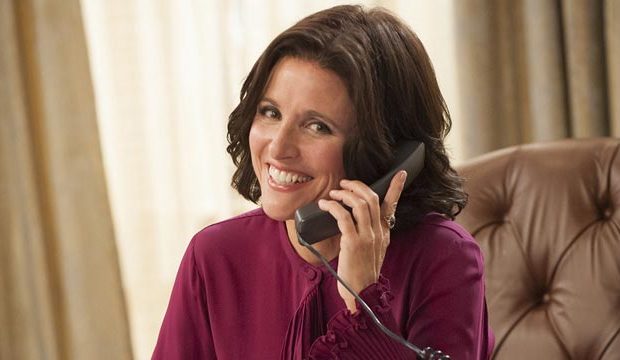 Julia Louis-Dreyfus (“Veep”) is poised to make history in more ways that one at this weekend’s Emmy telecast. She’s nominated for Best Comedy Actress for the fifth year in a row for playing inept politico Selina Meyer, and so far she’s undefeated for this role. When you add in her 2006 Best Comedy Actress victory for “The New Adventures of Old Christine,” that brings her to five total wins in the category, a record she shares with Mary Tyler Moore (“The Dick Van Dyke Show,” “The Mary Tyler Moore Show”) and Candice Bergen (“Murphy Brown”). One more win and she’ll stand alone.

Louis-Dreyfus has submitted to Emmy judges the episode “Mother,” in which Selina’s mother is on her death bed and Selina has to decide to pull the plug.

Only one expert disagrees with the consensus: Kerr Lordygan (Rotten Tomatoes), who instead is picking Laurie Metcalf (“Getting On”), giving her 14/1 odds. This is Metcalf’s first and only nomination for her role as Dr. Jenna James — the series concluded this past season — but Metcalf is a 10-time nominee overall, including two other bids this year alone for guest roles in “The Big Bang Theory” and “Horace and Pete.” Metcalf previously won three times for her supporting role in “Roseanne” (1992-1994).

Metcalf submitted the episode “Am I Still Me?” in which Dr. James is up for a coveted medical award but then learns that her mother has died.

None of our experts are predicting the other four nominees in this category, but based on their overall rankings Amy Schumer (“Inside Amy Schumer”) places third with 50/1 odds. This is Schumer’s second bid in this race, but she earned six nominations this year alone, including for guest-hosting “Saturday Night Live” and for her HBO stand-up special “Live at the Apollo.” She’s been nominated 11 times in all, winning Best Variety Sketch Series last year for “Inside Amy.”

Schumer submitted the episode “Welcome to the Gun Show,” which includes a number of sketches and routines commenting on gun violence and the National Rifle Association.

Ellie Kemper is nominated for the first time in her career for playing the title character in “Unbreakable Kimmy Schmidt.” She also gets 50/1 odds, and she submitted the episode “Kimmy Goes to a Hotel!” in which Kimmy tries to have a romantic weekend, but her past trauma makes her react violently to intimacy.

Like Kemper, Tracee Ellis Ross (“Black-ish”) is a first-time nominee, and she gets 50/1 odds as well. She submitted the episode “Sink or Swim,” in which her character, Rainbow Johnson, tried to teach her children to be less materialistic and has an angry outburst against a PTA mom at a pool party.

Rounding out the category is Emmy legend Lily Tomlin (“Grace and Frankie”) with 66/1 odds. Tomlin is nominated for the second time for playing free-spirited Frankie in the Netflix series, but she’s been nominated a whopping 23 times, winning six awards across writing, producing and voice-over categories, but she’s never won for acting in front of the camera. She submitted the episode “The Test,” in which Frankie gets stoned in order to pass a driving test.

Gold Derby’s Editors, who cover awards year-round, are also strongly backing Louis-Dreyfus. All seven of us are unanimous that she will prevail: O’Neil, Sheehan, Chris Beachum, Marcus James Dixon, Rob Licuria, Matt Noble and myself.

Our Top 24 Users, who got the highest scores predicting last year’s Emmys, aren’t quite unanimous, but it’s close. Twenty-two of them are forecasting Louis-Dreyfus, while Kemper and Tomlin are backed by one top user apiece.

The same is true of our All-Star Top 24, who got the highest scores when you combine their predictions from the last two years. Twenty-two are predicting Louis-Dreyfus, with a sole outlier predicting Schumer.

Tituss Burgess ('Unbreakable Kimmy Schmidt') could surprise at the Emmys and finally win, and here's…

Emmy episode analysis: Tracee Ellis Ross ('Black-ish') gets real about being a working mother in 'Kid…