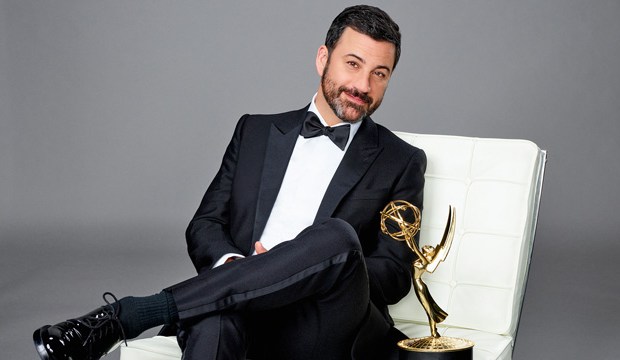 Jimmy Kimmel had both barrels loaded as host of this year’s Emmy telecast. From a pointed jab at perennial absentee Maggie Smith, to a hilariously uncomfortable takedown of producer Mark Burnett, he brought a sharp and humorous presence to one of the best Emmy Awards shows of recent years.

Kimmel’s opening video portrayed him frantically hitching rides to the Emmy ceremony, with cameos from the casts of Emmy favorites “Game of Thrones,” “The People vs. O.J. Simpson,” “Modern Family” and “Veep.” Kimmel even tried to score a ride in Selina Meyer’s motorcade, driven by failed Republican Presidential candidate Jeb Bush, whose not-so-subtle jabs at Donald Trump were comedic gold. And what’s NOT funny about Ryan Seacrest being burnt to a crisp by a dragon?

Kimmel’s monologue opened with what many of us were thinking. “If your show doesn’t have a dragon or a white Bronco in it, go home now,” he exclaimed. He then turned his attention to Marcia Clark, who was the “plus-one” of Sarah Paulson, nominated for playing the prosecutor in “The People vs. O.J. Simpson.” This led to what I thought were some of Kimmel’s best lines of the night, particularly when he asked Clark if she was rooting for O.J. to win.

Kimmel pointed out both the diversity of this year’s nominees, as well as Hollywood’s propensity for self-congratulation. He then returned to the subject of Trump, and placed the blame for the Republican Presidential nominee’s ascendance right at the feet of Burnett, producer of many reality shows including “Celebrity Apprentice.” “Thanks to Mark Burnett,” Kimmel proclaimed, “we don’t have to watch reality shows anymore because we’re living in one.” He then proposed that if Trump were to win the presidency and builds the wall between the United States and Mexico, Burnett would be the first person to be thrown over the wall.

As he closed his monologue, Kimmel stated that the TV academy has instituted a new policy — dubbed “The Maggie Smith Rule” — that requires Emmy recipients be present to win. He then proceeded to verbally flay the three-time Emmy winner, referring to her as Lame Maggie. “Why do we keep nominating this woman?” Kimmel asked. “She’s treating us like the People’s Choice Awards.” Later when Smith won in the Drama Supporting Actress category for “Downton Abbey,” Kimmel commandeered the trophy, saying that it would be in the lost and found should she wish to pick it up in person.

Not all of Kimmel’s bits worked. A note to all awards shows from here on out: stop with the food gags! Ellen DeGeneres ordered pizza for an Oscars audience. Chris Rock did the same shtick at this year’s Oscars, only this time with Girl Scout cookies. Apparently, the Emmy producers felt that having 7000 peanut butter and jelly sandwiches, made by Kimmel’s mother and distributed by the juvenile stars of Netflix’s “Stranger Things,” was somehow original. This was somewhat redeemed by a note from Kimmel’s mom to Amy Schumer stating her preference that Schumer would make for a better host and encouraging her to bring back “Parks and Recreation.”

Kimmel’s biting material was tempered by the genuine emotion shown by some of the winners, which gave the show a great sense of balance. Kate McKinnon shed tears and appeared visibly shaken at her surprise Comedy Supporting Actress win for “Saturday Night Live.” Julia Louis-Dreyfus dedicated her record-setting fifth consecutive Comedy Actress Emmy for “Veep” to her father, who had passed away only two days prior to the ceremony. In accepting his second consecutive Comedy Actor statue, “Transparent” star Jeffrey Tambor pleaded with Hollywood to hire more transgendered actors. Patton Oswalt dedicated his Variety Special Writing Emmy to his daughter and his late wife, who passed away earlier this year.

In the midst of such emotion, it was Paulson who provided what I thought provided the most impactful moment of the night. Taking the stage to a standing ovation, Paulson, who won after five losses in various categories, turned to Clark and apologized on behalf of herself and the world for what she called the “superficial and careless” judgement of her during the trial.

The show moved very well, coming in at just under three hours. It didn’t weigh itself down with lengthy clips packages and overly indulgent presenter banter. And when the show did take a pause, the effect was quite lovely. Tambor paid loving tribute to his friend and co-star Garry Shandling. Henry Winkler introduced an effective “In Memoriam” segment (with a touching rendition of Leonard Cohen’s “Hallelujah” by Tori Kelly) by remembering the life and career of the late Garry Marshall.

The show only faltered on one level. Only in the Drama Actor category were any clips of the nominees shown. Why only this category? None of the other categories had clips, and many only showed the nominees sitting in their seats as their names were being read. Why, at that late portion of the evening, did the producers suddenly decide to show clips of the nominated performances?

But this is a small trifle in what was otherwise a fun, fast-moving, and often powerful Emmy telecast.