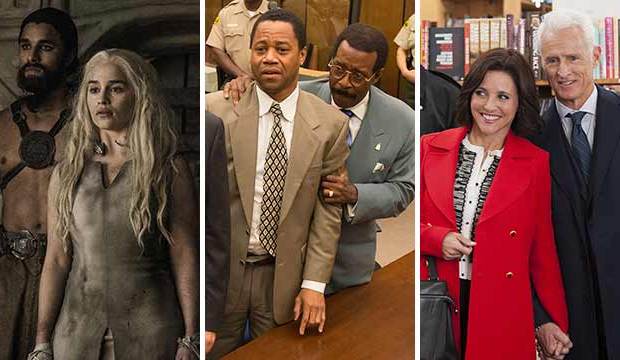 Courtesy of HBO and FX

As Gold Derby predicted, “Game of Thrones” repeated as Best Drama Series at Sunday’s Emmy Awards and also won both Best Drama Writing and Directing (“Battle of the Bastards”). Combined with the nine Emmys it won at the Creative Arts Awards last weekend, the HBO fantasy series tied the record of 12 it set last year for the most wins by a series in a single year. And it set a new Emmy record for most overall wins for a primetime series, claiming 38 Emmys over six years, thereby edging out “Frasier” which took home 37 awards in 11 years.

“Veep” claimed Best Comedy Series for the second year running while Julia Louis-Dreyfus took home Best Comedy Actress for the fifth year in a row. However, this political satire was snubbed in other races where it had been expected to prevail. Louie Anderson took Comedy Supporting Actor for “Baskets,” Kate McKinnon won Comedy Supporting Actress for her work on “Saturday Night Live” and multi-hyphenate Aziz Ansari shared in the Comedy Writing prize for an episode of his freshman hit series “Master of None.”

In other surprises in this genre, Best Movie/Mini Supporting Actress was won by Regina King for the second year in a row for the anthology series “American Crime.” And “The Abominable Bride,” a one-off episode of  the “Sherlock” series, was named Best TV Movie over, among others, frontrunner “All the Way.”