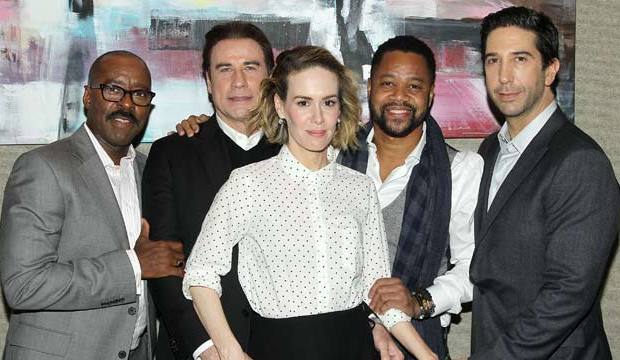 The TV miniseries was all but dying off a few years ago, but due to the rise of anthologies and limited series — a trend that FX started with “American Horror Story” — the form is once again thriving. FX is diving head-first into the format this year and will likely dominate the acting categories at the Emmy Awards thanks to a trio of such programs: “The People v. O.J. Simpson,” “Fargo” and “American Horror Story: Hotel.”

In addition to the fifth cycle of “AHS,” which survived its first Jessica Lange-less season, FX aired Season 2 of “Fargo” and managed to avoid the curse of “True Detective” (HBO) by earning acclaim for its new stories and characters. And new entry “The People v. O.J. Simpson” proved to be a juggernaut, gaining high ratings and much media attention as it reopened the discussion about the decades-old murder case that split the country along racial lines. Let’s take a look at all four of the Limited Series acting races to see where FX has the best shots at winning.

BEST ACTRESS — Sarah Paulson gave a strong performance in “The People v. O.J. Simpson” as District Attorney Marcia Clark, who tried the case against enormous setbacks and public humiliations. Paulson expertly handles both the job of impersonating the real-life Clark and creating a fully fleshed-out human character while not resorting to too much mimicry and outward mannerisms. This would be Paulson’s fifth nomination in a row, but she has yet to win. Her chief competition comes from “Fargo’s” Kristen Dunst, but Lady Gaga‘s surprise win at the Golden Globes for “AHS” could also translate to a nomination.

BEST SUPPORTING ACTOR — In an unprecedented move, FX could take the whole category. Jesse Plemons, Bokeem Woodbine and Nick Offerman were nominated at the Critics’ Choice Awards for “Fargo” while Denis O’Hare had a strong season on “American Horror Story” as transgender hotel clerk Liz Taylor. The perpetually overlooked Evan Peters had his best season to date but it remains to be seen if the TV academy will notice. And a slew of “The People v. O.J. Simpson” stars could earn bids including Sterling K. Brown, Nathan Lane, David Schwimmer and John Travolta.

BEST SUPPORTING ACTRESS — This category has been dominated by the women of “American Horror Story” in recent years with Kathy Bates, Angela Bassett and Paulson all nominated last year (Bates won the category in 2014). All three of them could repeat, putting Paulson in both lead and supporting categories and earning her nominations #5 and #6. Jean Smart is “Fargo’s” probable nominee here, while FX is pushing Connie Britton and Selma Blair for “The People v. O.J. Simpson.”