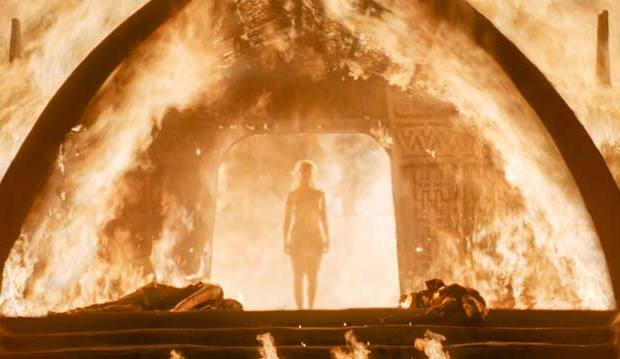 Emilia Clarke was literally on fire in the “Game of Thrones” episode “Book of the Stranger,” which aired May 15. She laid waste to an entire chamber of Dothraki leaders, who threatened and condescended to her before she lived up to her title as the Unburnt. She tipped over torches and burned the house down with all of them still inside, but only she emerged unscathed as hundreds of Dothraki onlookers fell to their knees in awe.

[WATCH] ‘Game of Thrones’ recap of ‘Oathbreaker’:
‘It began and ended with Jon Snow’

Talk about ending the episode with a bang — but would this be a worthy Emmy submission for Clarke? She has been nominated twice at the Emmys for Best Drama Supporting Actress (2013, 2015), but she has yet to win. For her 2013 nomination, she submitted another fiery episode — literally. That year in “And Now His Watch is Ended” she triumphantly took command of her new army, the Unsullied, after her dragon set a cruel slaver on fire. That year the award went to Anna Gunn for “Breaking Bad.”

[PHOTOS] ‘Game of Thrones’ season 6 episode 4:
‘Book of the Stranger’ spoilers include return of Littlefinger

When Clarke was nominated again in 2015 she submitted “The Dance of Dragons,” in which she narrowly escapes an ambush in an arena, once again with the help of her dragons. But that Emmy went to Uzo Aduba for “Orange is the New Black.”

So would Clarke be a strong contender to win for this episode? Vote in our poll below, and make sure to join the discussion on “Game of Thrones” and more in our forums.