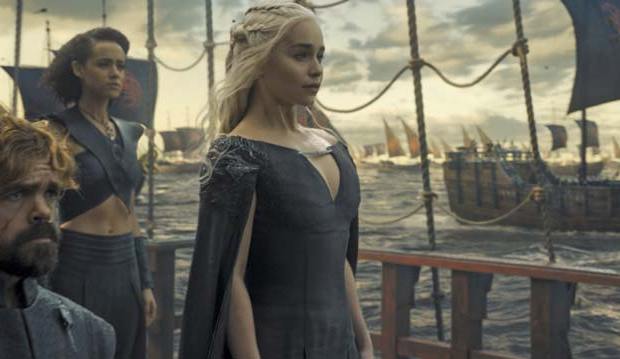 “Game of Thrones” won 12 Emmys in 2015, more than any other series has ever claimed in a single year. Those dozen trophies brought the show’s all-time total wins to 26, tying it with “The West Wing” and “Hill Street Blues” as the Emmys’ most honored drama. But “Game of Thrones” was only the second sci-fi or fantasy series ever to win Best Drama Series, following “Lost” in 2005. Was the sweep just a fluke or is the TV academy’s long-standing bias against genre shows finally over?

But it’s not necessarily a slam dunk. Netflix’s “House of Cards” has been waiting to take its turn in the winner’s circle, earning a Best Drama Series bid every year since 2013. It ranks second with 1/1 odds and support from two experts: Lynette Rice (Entertainment Weekly) and Robert Rorke (New York Post). On paper, “House of Cards” is the more typical Emmy-winner: a drama with real-world political implications (like “The West Wing”); a morally corrupt anti-hero (like “Breaking Bad”); and a tense, often combative marriage (like “The Sopranos”). And we mustn’t forget the awards-friendly pedigrees of Oscar-nominated creator Beau Willimon and Oscar-winning star Kevin Spacey. Perhaps we’re underestimating this series, now in its fourth year.

“Better Call Saul” (5/4 odds) ranks third with one expert, Adnan Virk (ESPN), betting on it to win. The spin-off of “Breaking Bad” earned a Best Drama nomination for its first season last year. Perhaps it will grow steadily from year to year just like “Breaking Bad” did before its back-to-back Best Drama wins in 2013 and 2014 for seasons five and six. “Breaking Bad” wasn’t even nominated for the top prize in its first season, so “Saul” already has a head start.

Of the other four shows nominated for Best Drama at last year’s Emmys, three are eligible to return: “Downton Abbey” (2/1 odds), “Homeland” (4/1 odds) and “Orange is the New Black” (5/1 odds). The only series that’s out of contention is “Mad Men,” which ended its run last spring. So what could fill that open slot?

USA’s critically hailed freshman drama “Mr. Robot” (3/2 odds) appears to be the strongest bet to enter the contest. It’s coming off of Best Drama wins at the Golden Globes and Critics’ Choice Awards. Though some shows are slow to catch on with Emmy voters, others rise to the top immediately, with “Homeland” and “Mad Men” claiming the top prize for their first seasons.

The fourth season of “The Americans” (3/1 odds) could also finally break through after years of critical plaudits. It’s coming off of arguably its best season yet.

Below, current odds set by the experts’ picks. Make your predictions here and compete against these experts and your friends.

2020 Costume Designers Guild Awards nominations: Oscar frontrunner 'Once Upon a Time' plus 'Dolemite,'…