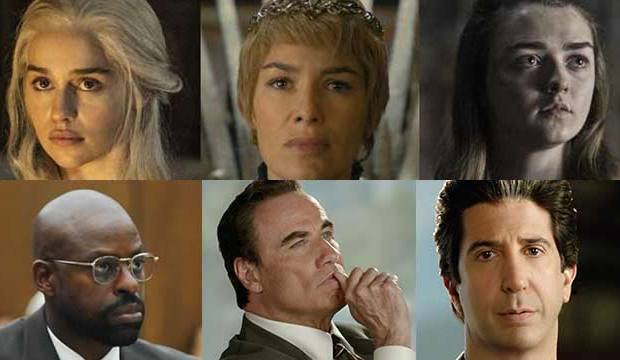 Courtesy of HBO and FX

When co-stars are nominated against each other at the Emmys, one usually wins. Because Emmys are judged off of single-episode submissions, a program having multiple nominees means that each of them gets additional episodes to showcase their acting, by appearing in co-stars’ submissions.

We call this the “Felicity Huffman rule,” alluding to the 2005 race for Best Comedy Actress that Huffman won against, among others, her “Desperate Housewives” co-stars Marcia Cross and Teri Hatcher. Multiple nominees from the same program also suggests a surplus of support among voters that would theoretically manifest further when voting for winners.

This year, “Game of Thrones” has three nominations for Best Drama Supporting Actress and “The People v. O.J. Simpson” has three for Best Movie/Limited Supporting Actor. (“Saturday Night Live” also has three nominations for Best Comedy Guest Actress, but the nature of the guest categories is such that even performances nominated from the same program rarely appear in each other’s episodes.) Gold Derby odds favor wins for Lena Headey over her “Game of Thrones” co-stars Emilia Clarke and Maisie Williams and Sterling K. Brown over his “The People v. O.J. Simpson” co-stars David Schwimmer and John Travolta.

However, of the 43 instances in Emmy history (listed below) in which a single program occupied three or more slots in a lead or supporting category, only 29 yielded a win by one of those heavily-nominated programs. This is only slightly better than the 27 that would have been expected if the winner had been picked at random in those races. The effect of additional showcases has been largely negligible on average and perhaps has been overemphasized as a result of confirmation bias. Programs with three or more nominations have won more often than not, but the Emmys have historically had only five slots per category (or even four in some relevant cases).

Six slots are standard now, so “Game of Thrones” and “The People v. O.J. Simpson” do not have the advantage of occupying the majority of slots in their categories. More importantly, the Emmys have reconfigured voting this year. Voters no longer rank the nominees; they instead just vote for one as the winner, so there is great potential for vote-splitting.

1969: “Hallmark Hall of Fame” co-stars Ossie Davis, David McCallum and Bill Travers lost to Paul Scofield (“Male of the Species”), the only other nominee.