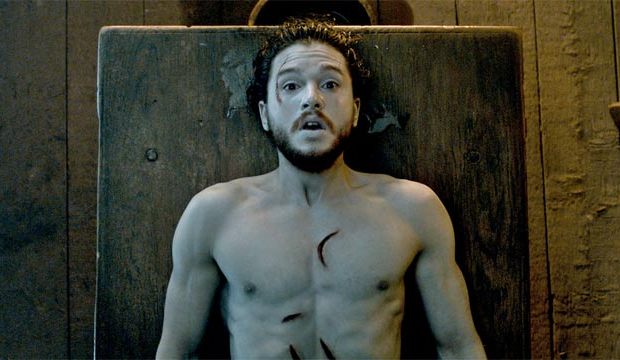 “Game of Thrones” fans have been busy discussing “Home,” the second episode of “Game of Thrones” Season 6, in our famous TV forums and they’re over the wall with excitement about the resurrection of Jon Snow (Kit Harington) by Melisandre (Carice Van Houten) and this week’s major deaths. Read some of their comments below and click here to join the discussion in our message boards.

Reis: Carice van Houten, my true love!! One of the best episodes of the series until now.

mafro987: I thought they got 2/3 big deaths right: Balon was good, Walda was good, but Bolton’s seemed rushed. Far better episode than last week’s though.

AMG: The Jon Snow thing was inevitable. Even for a show that kills off characters left, right and center, his “death” was never going to prevail. At least it isn’t being dragged out all season long.

Courtney Smith: We all knew it was coming, but I was still holding my breath and did a cheer when he opened his eyes. It was a great episode. I wasn’t sure how they were going to end the episode, if they were going to keep us waiting … or maybe we were all wrong and he wasn’t coming back.

vinny: A+ episode. Between Ramsey and Jon I am beyond happy.

FrozenBarbie: I am going to miss Roose Bolton’s sexy voice <swoon>. He was a prick (and good riddance), but that voice, I shall mourn.

Icky: So, Jon gets resurrected exactly the way everyone assumed? I thought they would at least surprise in the way he would return and/or give us some epic visuals. That resurrection scene was basic as hell.

dj: And there’s a very simple explanation for the Emmy wins. It’s an insanely popular show that looks glamorous and extremely difficult to pull off. This impresses Emmy voters. How else do you explain the show winning directing?