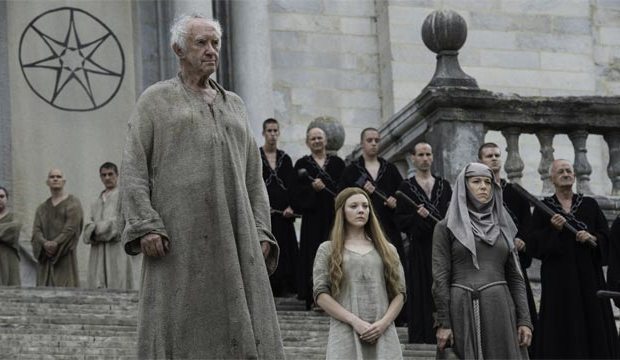 “Game of Thrones” fans, now you can get your first look at “Blood of My Blood,” the sixth episode of Season 6, by scrolling through our new photo gallery above. In one of the half-dozen pictures just released by HBO, the High Sparrow (Jonathan Pryce) prepares a new walk of shame ceremony for disgraced queen Margaery Tyrell (Natalie Dormer). Will it be as memorable as the original walk of shame scene from the Season 5 finale that earned Lena Headey an Emmy nomination as Best Drama Supporting Actress?

“Blood of My Blood” is written by Bryan Cogman and directed by Jack Bender. Here’s the official description from HBO, which does include spoilers: “An old foe comes back into the picture. Gilly (Hannah Murray) meets Sam’s (John Bradley) family. Arya (Maisie Williams) faces a difficult choice. Jaime (Nikolaj Coster-Waldau) faces off against the High Sparrow.”

The episode airs May 29 on HBO. “Game of Thrones” finally won Best Drama Series at last year’s Emmy Awards and even set a new record with 12 trophies in all. Will Season 6 keep up the same awards momentum? Sound off in the comments section below or right here in our famous TV forums.

After taking a tour through the photo gallery above, be sure to make your Emmy predictions HERE.  You’ll compete to win our contest prizes for best picks — $500 (first place), $300 (second place) and $200 (third place) in Amazon gift certificates — a place of honor on our leaderboard and a starring role in next year’s Top 24 Users (the two dozen folks who do the best predicting this year’s Emmy nominations). Be sure to read our contest rules.