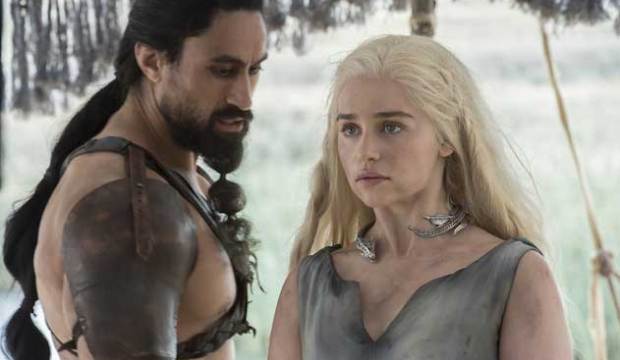 Have you recovered from the first episode of “Game of Thrones“? Entitled “The Red Woman,” this kick-off to the sixth season of the reigning Emmy champ for Best Drama Series was packed with action. As per the official description from HBO: “The fate of Jon Snow (Kit Harrington) is revealed. Daenerys (Emilia Clarke) meets a strong man. Tyrion (Peter Dinklage) gets used to living in Mereen. Sansa (Sophie Turner) and Theon (Alfie Allen) meet some unexpected allies. A rebellion arises in Dorne and Jaime Lannister (Nikolaj Coster-Waldau) arrives at King’s Landing with Myrcella.”

Showrunners David Benioff & D. B. Weiss wrote “The Red Woman.” Unlike the first five seasons of “Game of Thrones” — which have been based on George R. R. Martin‘s “A Song of Ice and Fire” book series — the writers are now ahead of the author.

‘Game of Thrones’ season 6 premiere reactions:
Was ‘The Red Woman’ the ‘best’ or ‘worst’ episode?

Benioff and Weiss won an Emmy last year for their script for “Mother Mercy” and contended in 2011 for “Baelor,” 2013 for “The Rains of Castamere” and 2014 for “The Children.”

And, after four years as an Emmy also-ran, the show finally won Best Drama Series at last year’s Emmys. It set a new record with 12 awards in all. After taking a tour through the photo gallery above, be sure to make your predictions for this year’s Emmys, beginning with Best Drama Series HERE.