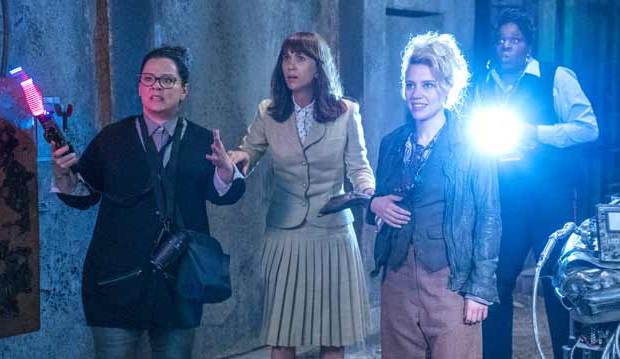 The original “Ghostbusters” was a box office smash hit and an awards contender in 1984. Will the new version, released July 15, fare as well 32 years later?

That first edition of “Ghostbusters” took in $242 million at the box office, which is equivalent to $610 million in today’s dollars. It earned two Oscar nominations: Best Visual Effects (losing to “Indiana Jones and the Temple of Doom”) and Best Original Song for Ray Parker Jr.‘s iconic theme music (losing to Stevie Wonder‘s “I Just Called to Say I Love You” from “The Woman in Red”). It also picked up a trio of Golden Globe bids: Best Musical/Comedy Picture, Best Musical/Comedy Actor (Bill Murray) and Best Song. That’s a tough act to follow.

But director Paul Feig has had a solid track record with critics and awards. His greatest success to date was “Bridesmaids” (2011), which earned Oscar nominations for Melissa McCarthy‘s supporting performance and Kristen Wiig and Annie Mumolo‘s screenplay (Feig re-teams with McCarthy and Wiig in “Ghostbusters”). “Bridesmaids” was also nominated for Best Musical/Comedy Picture at the Golden Globes, as was another Feig-McCarthy collaboration, “Spy” (2015), so the Globes might be the best bet for “Ghostbusters,” especially if it’s a box office hit.

Also a possibility for the film are the MTV Movie Awards, where Feig’s films have been consistently embraced (eight nominations and two wins for “Bridesmaids,” one nomination for 2013’s “The Heat” and two nominations for “Spy”). McCarthy, in particular, has been an MTV darling, winning Best Comedic Performance for “Bridesmaids” and receiving the Comedic Genius Award in 2016.

The rebooted “Ghostbusters” could even be a contender for critics’ awards. Specifically, the Critics’ Choice Awards have separate categories for comedies, where Feig’s films have picked up nominations: “Bridesmaids,” “The Heat” and “Spy” all contended for Best Comedy Movie, with “Bridesmaids” prevailing.

What do you think of the awards potential of “Ghostbusters.” Make sure to discuss the film in our forums.

'Barb and Star Go to Vista Del Mar' ... and maybe to the Oscars again, too?

Bill Murray on making 'On the Rocks' with Sofia Coppola: 'Everything seems to be like a dance'…

Psst! Bill Murray ('On the Rocks') has a secret advantage in Best Supporting Actor Oscar race