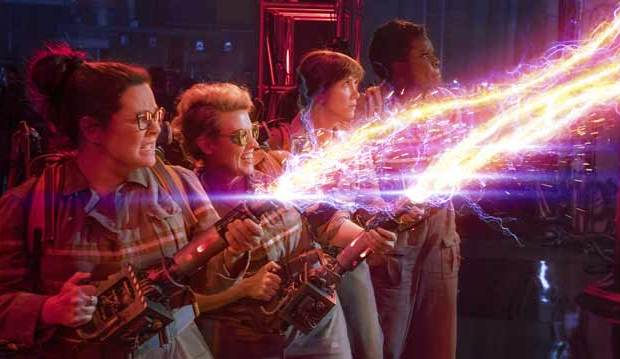 Paul Feig‘s reboot of “Ghostbusters” has been under fire ever since it was announced, with many internet fanboys objecting to the new female cast (Kristen Wiig, Melissa McCarthy, Kate McKinnon and Leslie Jones) and organizing to make the trailer the most disliked in YouTube history; wrote one insightful commenter on its YouTube page, “Is this a movie, or propaganda for the feminist movement?” Adds another scholar, “There is nothing good that can be said about it. Except for the people who were literally bribed into writing positive reviews.”

If that’s the case, several critics must be out shopping for yachts and villas to buy with that sweet Sony Pictures bribe money because the film has actually received mostly positive reviews. It has scored 60 on MetaCritic but it has 73% freshness on Rotten Tomatoes. MetaCritic uses a weighted scoring scale from zero to 100, while Rotten Tomatoes is a pass/fail system, suggesting that the film probably won’t make many top-10 lists, but that most critics at least like it. Indeed, the MetaCritic breakdown includes 30 positive reviews, 18 mixed reviews and only three outright negative ones.

Below, read some of the reviews and their best take-downs of the film’s sexist online trolls.

Dana Stevens (Slate): “One of the funniest things about Paul Feig’s all-female remake of the 1984 Ivan Reitman comedy ‘Ghostbusters’ is the gulf between the acrid reception the new film has received in some quarters — mainly the airless lairs of hardcore fanboys of the original, irked that a classic of their childhood has been slimed by the presence of women — and the unassuming, fizzy lightness of the movie itself. This new’ Ghostbusters’ couldn’t be less interested in advancing an ideological agenda … The only agenda Feig, his co-screenwriter Katie Dippold, and his four female leads have is to provoke a steady stream of giggles, punctuated by the occasional scream.”

Stephanie Zacharek (Time): “No one has to love Paul Feig’s new ‘Ghostbusters,’ or even like it. But anyone who continues to stand against it on principle — ‘My childhood has been defiled! I don’t like its stars! The trailer was bad!’ — is an unimaginative schmuck. Because Feig’s ‘Ghostbusters’ is its own definitive creature, an affable, inventive riff on Ivan Reitman’s proton-packing caper that exists not to score points, but only to make us laugh. For a summer comedy, there’s no nobler purpose.”

Tasha Robinson (The Verge): “‘Ghostbusters’ is a lively, hilarious crowd-pleaser, which is all that’s really required of a big summer action comedy. Ever since it was announced, though, the primary question surrounding it hasn’t been ‘Is it better than the original version?’ or ‘Is it funny?’ It’s been ‘Why do we need this movie? What’s the point of remaking a beloved comedy classic with women?’ … Unlike so many of the people attacking this film sight unseen, the film itself doesn’t fuss over its stars’ gender. It just focuses on humor, surprises, and having a good time.”

Nigel M. Smith (The Guardian): “Rejoice! The new ‘Ghostbusters’ is good. Very good, in fact. It had to be. No comedy has faced more advance scrutiny – even hostility – than Paul Feig’s reboot of Ivan Reitman’s beloved 1980s hit … What incensed Ghostbusters fanatics, it seemed, was Feig’s idea to reverse the genders of the ghostbusting quartet – a decision whose politics his film tackles bluntly and frequently, without sacrificing laughs for sermonising.”

What are the 10 best films of the 21st century? Our forum posters debate

Drew McWeeny (HitFix): “‘Ghostbusters’ is a big fat slice of silly summer entertainment, confident and sometimes quite beautiful. It is the biggest stretch Feig’s made so far as a filmmaker, embracing the technical side of things in a way he never has so far, and stuffed chock full of affection for everything that makes ‘Ghostbusters’ such an enduring favorite … The original ‘Ghostbusters’ will always be a film that means something special to me. The good news is, there’s a whole new generation that’s about to feel that way about this one. And more power to them.”

'Barb and Star Go to Vista Del Mar' ... and maybe to the Oscars again, too?