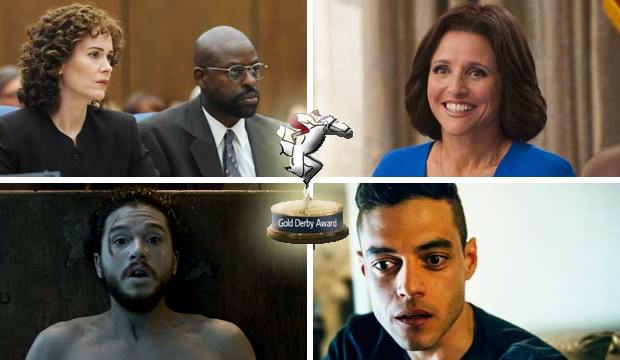 Courtesy of FX, HBO and USA

The 2016 Gold Derby TV Awards have been announced, and “The People v. O.J. Simpson” led the way with five victories, sweeping all of its nominations: Best Movie/Miniseries, lead acting prizes for Courtney B. Vance and Sarah Paulson, supporting honors for Sterling K. Brown and Ensemble of the Year. On top of that, Paulson was named Performer of the Year.

But “People v. O.J.” had to share Best Movie/Miniseries with fellow FX anthology “Fargo.” “Fargo” won one other prize to go with its shared win in the top category: Best Movie/Mini Supporting Actress for Jean Smart as the matriarch of the Gerhardt crime family. Smart previously won a Gold Derby Award 10 years ago for her supporting performance in “24.”

“Veep” was the next biggest winner with four awards. It took Best Comedy Series for the first time and Best Comedy Actress (Julia Louis-Dreyfus) for the second time (Louis-Dreyfus previously prevailed in 2014). In addition, the HBO political satire won Best Comedy Guest Actor (Martin Mull) and Best Comedy Episode for “Mother,” written by Alex Gregory and Peter Huyck and directed by Dale Stern — they’re also up for Emmys for writing and directing that episode.

The last comedy prize went to Jeffrey Tambor (“Transparent”) as Best Comedy Actor for the second year in a row.

Gold Derby’s voters spread the wealth in the drama categories. Though “Game of Thrones” took Best Drama Series for the second straight year, it didn’t repeat the overwhelming sweep it achieved last year when it won all six of its categories. This time around HBO’s epic fantasy series won just two other prizes: Best Drama Supporting Actor for Kit Harington, a first-time winner, and Best Drama Supporting Actress for Lena Headey, who won last year as well.

“The Leftovers,” which entered these awards with an impressive seven nominations, didn’t go away empty handed. It took Best Drama Episode for its extended dream sequence “International Assassin,” directed by Craig Zobel and written by Damon Lindelof and Nick Cuse. This is the first Gold Derby Award for “The Leftovers,” but Lindelof has a long history with this prize. He won this award a whopping five times before as a writer for “Lost.”

Voters split the variety categories: “Last Week Tonight with John Oliver” claimed Best Variety Series for the first time, but Best Variety Performer went instead to Samantha Bee for her new TBS political comedy “Full Frontal.” That continues the trend of female winners in that contest. The only male variety performer who has ever won was Dave Chappelle, who prevailed for “Chappelle’s Show” way back in 2004.

See the complete list of Gold Derby Award winners below, and you can also watch the entire video of our announcement, including interesting stats on close races and where we think the Emmys might follow suit.

ENSEMBLE OF THE YEAR
“Fargo”
“Game of Thrones”
“The Leftovers”
“Orange is the New Black”
X — “The People v. O.J. Simpson”
“Veep”