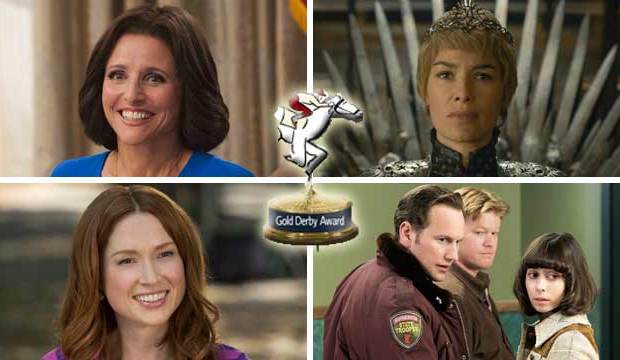 Courtesy of HBO, Netflix and FX

The Gold Derby TV Award nominations were announced, and “Veep” leads all programs with nine bids, including Best Comedy Series, Best Comedy Actress (Julia Louis-Dreyfus), Best Comedy Episode (“Kissing Your Sister” and “Mother”), and Ensemble of the Year. In addition, Louis-Dreyfus is up for Performer of the Year. (Watch our complete video announcement below, and CLICK HERE for complete rules on voting for the winners, which you can do effective immediately.)

Though “Veep” is the defending champion for Best Comedy Series at the Emmys, the HBO political satire has never won the top prize at the Gold Derby Awards, and Louis-Dreyfus has only won Best Comedy Actress once (in 2014), unlike four times in a row at the Emmys. Is this the year “Veep” finally takes our top prize?

It faces a tough challenge from “Unbreakable Kimmy Schmidt,” which is close behind with eight nominations, including Best Comedy. As at the Emmys it also competes for Best Comedy Actress (Ellie Kemper) and Best Comedy Supporting Actor (Tituss Burgess), but our users righted the Emmys’ wrongs by also nominating supporting actress Jane Krakowski and four guest actresses: Anna Camp, Tina Fey, Lisa Kudrow and Amy Sedaris.

Peter MacNicol stripped of Emmy nomination for ‘Veep,’ will be replaced

Next up among dramas is “The Leftovers,” which greatly improved its nominations haul in its second season. After earning one nom in 2015 – Best Drama Supporting Actress for Carrie Coon – it picked up seven this time around. Coon earned a promotion to the lead category, and she’s joined by Best Drama Actor contender Justin Theroux and supporting nominees Christopher Eccleston and Regina King. Does it have enough momentum now to overtake “Thrones”?

[WATCH] Emmy Awards nominations analysis: Who are the early frontrunners to win?

Among movies and miniseries, “Fargo” is the leader of the field at the Gold Derby Awards. Its eight nominations include Best Movie/Miniseries and six acting nominations, including for Emmy-snubbed lead actor Patrick Wilson and supporting actress Cristin Milioti.

“American Crime” is next with six nominations, including bids for supporting actors Connor Jessup and Joey Pollari, whom the Emmys overlooked. “The People v. O.J. Simpson” picked up five noms including Best Movie/Mini Actress (Sarah Paulson), Best Movie/Mini Actor (Courtney B. Vance) and Best Movie/Mini Supporting Actor (Sterling K. Brown). Gold Derby voters left out Emmy contenders Cuba Gooding Jr., David Schwimmer and John Travolta, but Paulson did pick up an additional bid for Performer of the Year while Brown is also up for Breakthrough Performer of the Year.

Other headlines in these nominations include Best Comedy Series noms for critically acclaimed “Broad City” and “You’re the Worst,” a Best Drama bid for fourth-season horror series “Bates Motel” and three nominations for HBO’s miniseries “Show Me a Hero,” which was blanked by Emmy voters.

ENSEMBLE OF THE YEAR
“Fargo”
“Game of Thrones”
“The Leftovers”
“Orange is the New Black”
“The People v. O.J. Simpson”
“Veep”

2 Nominations
“All the Way”
“American Horror Story: Hotel”
“Full Frontal with Samantha Bee”
“The Good Wife”
“Horace and Pete”
“How to Get Away with Murder”
“Inside Amy Schumer”
“Last Week Tonight with John Oliver”
“Late Late Show with James Corden”
“The Night Manager”
“Orange is the New Black”
“Penny Dreadful”
“You’re the Worst”

4 FX writers on the benefits of representing a 'tapestry of cultures, identities, experiences and…

'Fargo' writer/producer Scott Wilson on having a diverse creative team: 'It's ideal to have as many…