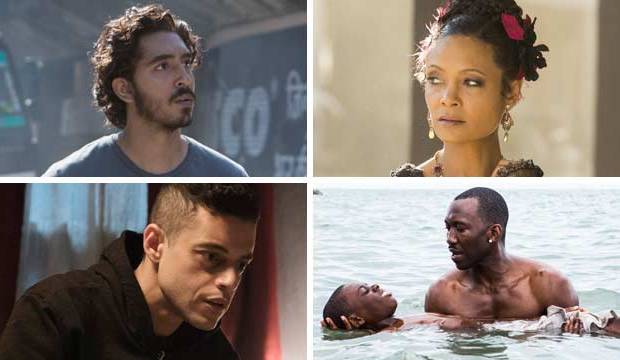 The Oscars have faced a lot of controversy in the past two years for their lack of diversity among the nominees, but the Golden Globes prove markedly inclusive this year in both the film and TV fields. Looking at achievements in front of the camera, last year (2015) there were two nominees of color in the film acting races and 13 in the TV acting races, and three won: Gael Garcia Bernal (Best TV Comedy Actor, “Mozart in the Jungle”), Oscar Isaac (Best TV Movie/Limited Series Actor, “Show Me a Hero”) and Taraji P. Henson (Best TV Drama Actress, “Empire”). This year seven actors of color are nominated for film and 12 for TV, and a few are looking to make history.

If Thandie Newton (“Westworld”) should win the catch-all Best TV Supporting Actress category she will be the first black actress to win it and only the second person of color after Sandra Oh (“Grey’s Anatomy,” 2005). In the Best Movie/Limited Series Actor race Riz Ahmed (“The Night Of”) has already made history as the first nominee in that category of Asian descent (he is of Pakistani heritage).

2016 Emmy winner Rami Malek (“Mr. Robot”) is nominated for the second time at the Globes for Best TV Drama Actor. He would be the first winner of color in that category since Jimmy Smits (“NYPD Blue”) more than 20 years ago (1995) and the first of Egyptian descent.

On the comedy side, Anthony Anderson (“Black-ish”) or Donald Glover (“Atlanta”) would be the third African-American winner for Best Comedy Actor, following Bill Cosby (“The Cosby Show,” 1985-1986) and Don Cheadle (“House of Lies,” 2013). In the Best Comedy Actress race Issa Rae (“Insecure”) and Tracee Ellis Ross (“Black-ish”) will try to become only the second African-American actress to win after Debbie Allen (“Fame”) became the first to do so 34 years ago (1982).

In the film supporting categories, Mahershala Ali (“Moonlight”) and Viola Davis (“Fences”) may be the frontrunners to win, especially following their recent victories at the Critics’ Choice Awards. Actors of color have won both of those categories in recent years, though if Dev Patel (“Lion”) pulls off a surprise for Best Film Supporting Actor, the British actor of Indian descent would be the category’s first winner of Asian heritage since Cambodian Haing S. Ngor won for “The Killing Fields” back in 1984.

Of course, none of this is to suggest that Hollywood’s work is done — remember, the two years of #OscarsSoWhite protests immediately followed the Oscar victory for “12 Years a Slave” — but the Golden Globes lineup is nevertheless encouraging. It’s fitting that the Hollywood Foreign Press should cast such a wide net ethnically and geographically.

Make your Golden Globe predictions now; change them till Jan. 8