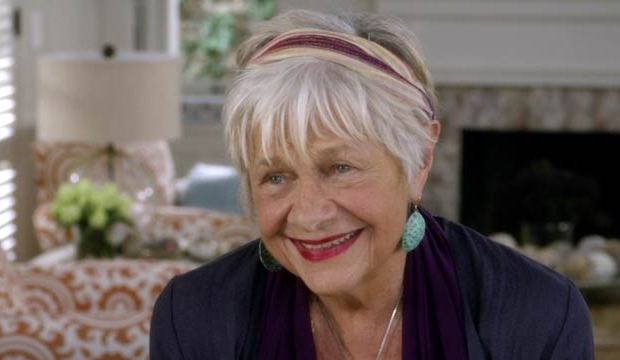 Despite a stellar acting career that includes a Supporting Actress Oscar (“Bonnie and Clyde,” 1967) and five Tony nominations, Estelle Parsons has never received an Emmy nomination. And that oversight is despite a 53-year career in television and recurring roles on such classics as “All in the Family” and “Roseanne.” However, her luck could change once Emmy voters see her sensational guest arc on season two of Netflix’s “Grace and Frankie,” which premiered earlier this month.

Parsons’s first appears in the season’s 11th episode, “The Bender,” as Babe, the free-spirited and foul-mouthed friend and neighbor of Grace (Jane Fonda) and Frankie (Lily Tomlin). Babe returns from her travels and asks Frankie for two favors: to help her throw the party to end all parties and then to help her commit suicide. But it is during the subsequent episode, appropriately titled, “The Party,” where Parsons gets a real chance to shine. Babe is the center of the episode, which gives Parsons a plethora of scenes to show range and sympathy.

In the first scene she attempts to make “gallows humor” style jokes about her suicide, before confessing to Frankie that she has terminal cancer. Later, she attempts to play referee between a feuding Grace and Frankie, but when the talk returns to her impending suicide, she faces not only a hesitant Frankie, but also a horrified Grace, who is vehemently opposed to the idea. These scenes provide much of the comedy of the episode, particularly as Parsons tosses off one profane one-liner after another.

Of course, a great Emmy submission needs impact, and Parsons has not one, not two, but THREE powerhouse scenes that left me speechless. In the first, Babe outlines her “plan,” and admits that although she is afraid of dying, she is “more scared of being a burden, of being in pain, and of not being [herself] anymore.” Parsons delivers this line with a chilling matter-of-factness, without any melodrama or cheap histrionics, giving the entire scene an authenticity rarely seen in most comedies.

Her second such scene comes during the party itself.  Babe is all smiles, but after a moment of fatigue and pain, she decides that it’s time to go. She delivers a very heartfelt speech to her guests, many of whom are unaware of her plans, and almost loses her composure as she tells them how much she loves all of them. With just a tiny facial expression and a catch in her voice, Parsons conveys more emotion than many performers could manage with a two-page monologue.

And in her final scene, Babe says a light-hearted, yet touching goodbye to both Grace and Frankie, and talks about the joy of having lived her life to the fullest. Again, Parsons conveys such a depth of emotion with the simplest of gestures. Parson shows us Babe’s fear, but the audience admires this independent woman who chooses to embrace her fate and rejoice in having lived life on her own terms. When Babe chants, “Inhale peace, exhale joy,” it is enough to bring a tear to the eye and, hopefully, enough to bring Parsons her first Emmy nomination.