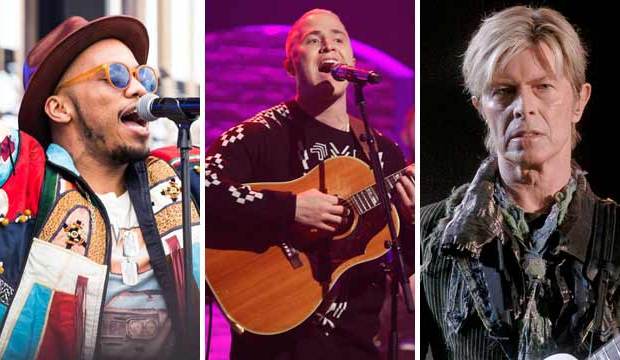 The 59th Grammy nominations were announced on December 6, and several of our forum posters are voicing their thoughts on the nominees.

As expected, Beyonce leads the pack with a whopping nine nominations including Album of the Year (“Lemonade”) as well as Record and Song of the Year (“Formation”). Other artist receiving multiple bids includes Drake (eight), Rihanna (eight), Kanye West (eight), Chance the Rapper (seven) and Adele (five).

Some of the biggest surprises this year include Sturgill Simpson in Album of the Year for “A Sailor’s Guide to Earth,” Mike Posner’s “I Took a Pill in Ibiza” in Song of the Year, and Anderson Paak in Best New Artist.

Dish the Grammy nominations with Hollywood insiders in our notorious forums

And there are notable snubs this year, including David Bowie (“Blackstar”) missing from Album of the Year; Sia with Sean Paul (“Cheap Thrills”) and Drake with WizKid and Kyla (“One Dance”) left out of Record of the Year; and Alessia Cara, Bryson Tiller and Shawn Mendes absent from Best New Artist.

What other Grammy surprises and snubs did our forum posters notice? Read some of their comments below, and make sure to join their debate in our forums.

GusCruz: The Bowie snub in AOTY is disgusting. I’m almost vomiting thinking about it. Simply mean.

EmmyWinner: Of course they didn’t nominate Bowie and Radiohead, so Beyonce could easily win AOTY. If you can’t see it, you are on crack.

Brennan Merone: Did anyone here predict “I Took A Pill In Ibiza”? Because if you did, you deserve a medal.

Xtina: Honey, no one here predicted that “I Took A Pill In Ibiza” would get a Song of the Year nomination.

Vinny: Gotta love the Grammy surprises LOL. Twenty One Pilots doing so well made my day.

2017 Grammy Nominations List: All The Nominees for the 59th Grammy Awards

ProfessorChaos: Three years ago The Chainsmokers were a joke. “#Selfie” was destined to be one of the most embarrassing one-hit wonders of all time. Now they’re a multi-platinum, three-time Grammy nominated artist. That’s an amazing career turnaround they’ve had.

PoweR: I had a feeling Anderson Paak would be nominated for BNA. His album is one of the most acclaimed albums of the year. Chance The Rapper should win this.”

AMG: Beyonce leads with nine nominations. Beyonce is the first artist to earn nominations in the pop, rock, R&B and rap categories in the same year.

Kadu335: Despite the surprising absence of Eric Church, the country nominees are great for the most part! I’ll say that, if Maren Morris gives a great performance on “SNL” like the one she did at the CMAs last month, it could definitely help her boost her profile in the BNA race. I rooting for her! After the recent losses for Kacey Musgraves and Brandy Clark I feel like Maren fits more in the Grammy mold.