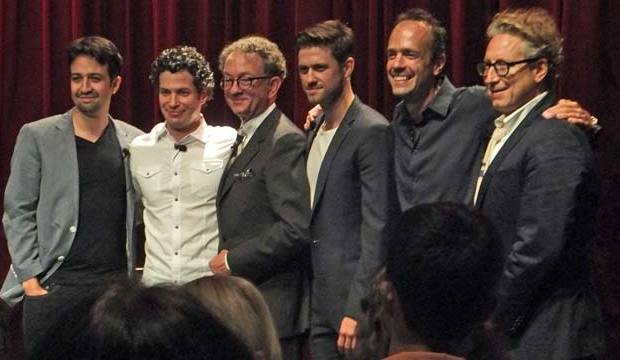 “I, like many of you, experienced this live on Twitter and freaked out in real time as the bar for what can be done with a movie musical live on screen was raised overnight,” said Lin-Manuel Miranda on Monday, August 15, when he hosted a live Q&A for “Grease: Live!” in New York City. He was joined on stage by “Grease” director Thomas Kail, who just won a Tony in June for directing Miranda’s Broadway blockbuster “Hamilton,” as well as his co-director Alex Rudzinski, costume designer William Ivey Long, casting director Bernard Telsey and star Aaron Tveit.

“Grease: Live” reaped 10 Emmy nominations, including Best Special Class Program and bids for Kail, Ruszinski, Long and Telsey. Kail recalled the early conversations about staging “Grease” as a live TV event. Approaching the ambitious project, he argued, “If we’re going to put the word ‘Live’ in the title, let’s embrace it. Let’s wrap our arms around that idea and let’s show the joy of making it in front of all these people.”

Find out how ‘Grease Live!’ will do at the Emmys this year — Click Here

For Tveit, the experience was “something I’ve never felt before.” After a screening of the “Born to Hand Jive” production number he admitted, “Watching it back was kind of emotional because it’s 400 people all committed to this thing, and no one ever messing up or dropping the ball for anybody else. As an actor I’ve never felt, in anything else I’ve ever done, an experience like that.”