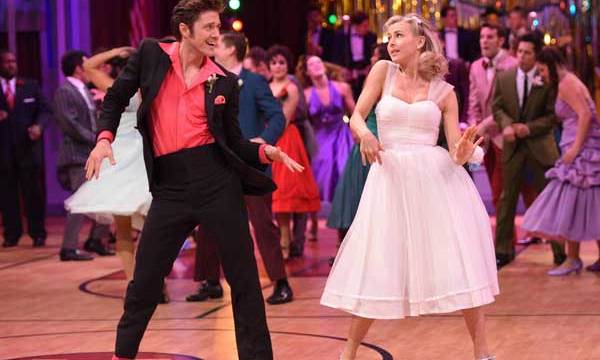 During our recent webcam chat (watch above), “Grease: Live” executive producer Marc Platt beamed as he talked about the 10 Emmy nominations for the landmark television event, calling them “the icing on the cake for what was, for all of us, a really memorable, terrific experience.” Platt, who produced the smash hit stage show “Wicked,” says he leapt at the opportunity to work on this new version of the tuner that began life on Broadway in 1972 before being turned into a film in 1978 that still ranks as the highest grossing movie musical of all time. “I had been so delighted that the live musical format had been brought back to television,” he explains. He saw it as a chance to try something new, to find out if “the best of live theater and the more cinematic nature of what television could be might be combined into its own art form.”

Producing the movie musicals “Nine” (2009) and “Into the Woods” (2014) gave Platt a leg-up for this project. “Getting the big picture of both gave me the ability to figure out how to integrate, and also how to assemble a team of individuals who came from the different areas of expertise.” This included renowned theater director Thomas Kail, a recent Tony winner for “Hamilton,” and veteran “Dancing with the Stars” helmer Alex Rudzinski; the directing duo were also recognized by the TV academy.

He also spoke highly of the cast that was drawn from both TV and stage, including Julianne Hough, Aaron Tveit, and Vanessa Hudgens. “We really had our choice from worlds of theater and television, and even pop music,” he revealed, “and really were able to take advantage of particular talent.” And, he adds, “there wasn’t a single person there who just didn’t have this feeling of, I’m so lucky I get to be here and get to do this.”

Platt last competed at the Emmys with the HBO miniseries “Empire Falls” (2005). He earned his first Oscar nomination last year for Steven Spielberg’s “Bridge of Spies.” Two of his upcoming films — Damien Chazelle’s “La La Land” and Ang Lee’s “Billy Lynn’s Long Halftime Walk” — top our early predictions for the upcoming Oscars. Check out our full interview for more inside stories from the set of “Grease: Live!”