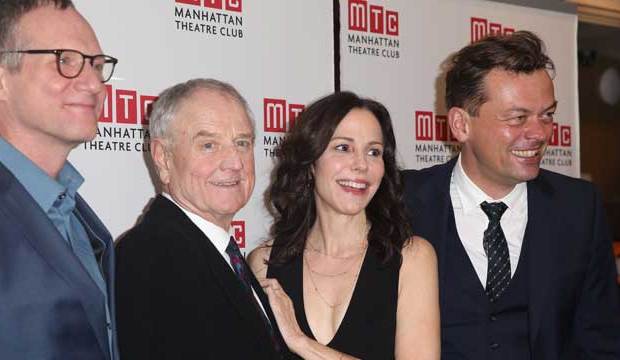 “Heisenberg,” a new play by Tony winner Simon Stephens (“The Curious Incident of the Dog in the Nighttime”), opened on Broadway on Oct. 13 to generally positive reviews following an acclaimed Off-Broadway staging last summer. The two-hander stars Tony winner Mary Louise-Parker (“Proof”) and veteran actor Denis Arndt (making his Broadway debut). It follows the chain of events triggered after Georgie (Parker) spontaneously kisses a stranger, Alex (Arndt), on the back of the neck in the middle a bustling London train station. Sparing staged with only two tables, two chairs, and a pillow, the characters and audience grapple with the unclear motivations behind the budding relationship between the two very different individuals.

Among those critics hailing “Heisenberg” was Ben Brantley (New York Times) who named it a Critics’ Pick, praising the production as “wondrously stealthy” and singling out the “magnetism of its performances,” director Mark Brokaw’s “crystalline precision,” and playwright Stephen’s “uncannily subtle” abilities as a dramatist. Likewise, Mark Kennedy (Associated Press) calls the play, “Quirky, lovely, funny, powerful, and special,” and “as sumptuous an experience as theater gets.”

However, not all reviewers felt the gravitation pull of the material. Terry Teachout (Wall Street Journal), characterizes the show as “blush-makingly trite” and filled with “eye-rollingly twee” dialogue that “no actor, however talented, should be expected to utter with a straight face.”

Based on its overall strong critical response, “Heisenberg” has the possibility of reaping Tony nominations in four major categories. With only seven plays slated to open this season thus far, it is a serious contender for Best Play. Stephens won this race in 2015 for his book-to-stage adaptation of “The Curious Incident of the Dog in the Nighttime.”

Parker seems well-poised to stage a comeback at the Tony Awards. Jesse Green (Vulture) called this her “best stage work in years,” potentially since that Tony-winning turn in “Proof” in 2001. While the actress has two other Tony nominations to her name (“Prelude to a Kiss” [1990], “Reckless” [2005]), her last two Broadway outings — “Hedda Gabbler” and “The Snow Geese” — left both critics and the Tony nominating committee cold.

Arndt could be a contender for Best Actor. Although he will have a lot of competition from better-known actors in higher-profile productions, Arndt has received near-universal praise for his grounded and emotionally-stirring work in “Heisenberg” and his chemistry with Parker.

Although Brokaw has never earned a Tony nomination for any of his six previous Broadway productions, the austere staging of “Heisenberg” focuses the audience’s attention on the simple, yet highly effective staging of the show. However, that stripped-down approach will likely preclude “Heisenberg” from receiving nominations in the three design categories.

2021 Tony Awards slugfest: Who has the edge in the incredibly competitive Play races? [WATCH]

Daniel Kluger ('The Sound Inside,' 'Sea Wall/A Life') on building 'a world and an emotional vocabulary'…

Jonathan Majors ('When We Rise'): 'Growing up, you don't really come across a lot of gay rights history'…

Tony Awards predictions slugfest: Bette Midler is a lock but upsets loom in other top races