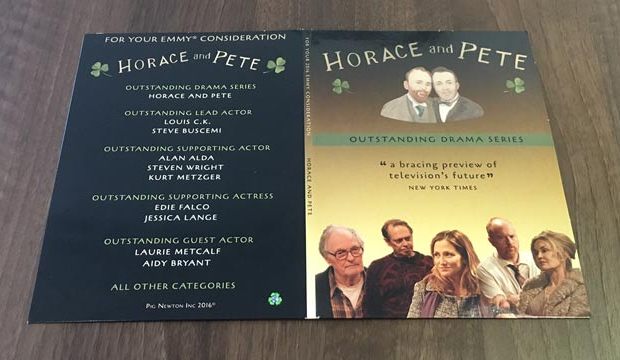 “A bracing preview of television’s future,” declares the New York Times on the cover of the shiny new Emmy Awards mailer for Louis C.K.‘s dramatic web series “Horace and Pete.” Much like the program itself, the FYC campaign is completely self-funded by C.K. and his Pig Newton production company, meaning he paid out of pocket to ensure that every one of the TV academy’s 19,000 members received the booklet that includes the entire 10-episode series on three discs.

The dark comedy/drama is about a family-owned 100-year-old Brooklyn bar now operated by the title characters played by C.K. and Steve Buscemi. The show’s heralded cast members are featured front and center on the FYC mailer, from left to right: Alan Alda (as foul-mouthed, bigoted bartender Uncle Pete), Buscemi (as Pete), Edie Falco (as Horace’s sister), C.K. (as Horace) and Jessica Lange (as the last girlfriend of Horace’s father). Other Emmy-eligible performers featured inside the booklet are Steven Wright, Kurt Metzger, Laurie Metcalf and Aidy Bryant.

Emmy shockeroo: Will comedian Louis C.K. and ‘Horace and Pete’ be embraced in drama categories?

The Emmy booklet is deliberately simple in design, much like the series itself which some have described as a multi-camera TV play. The package was created by Topanga Mac’s husband and wife team of John and Mary Sipple. See two more exclusive photos below.

C.K. has conquered the Emmy Awards in recent years, winning six times in writing categories for comedy and variety, but will voters embrace him in the new dramatic category? Based on a new academy rule implemented last year, one-hour programs should be contending as dramas while half hour shows should be comedies. The varying lengths of “Horace and Pete” episodes — they range from 30 minutes to 67 minutes — offered them the chance to go in either direction, but they selected drama.