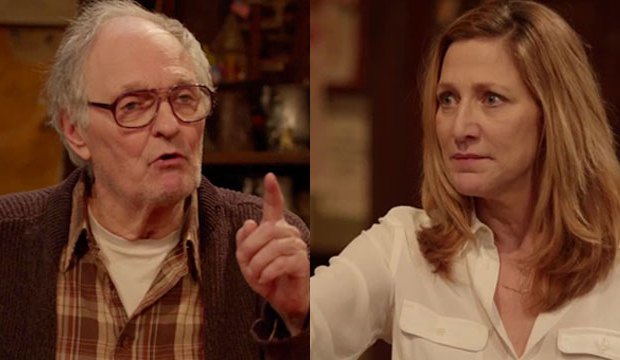 Louis C.K. earned five deserved Emmy nominations for Best Comedy Actor for “Louie” and that FX series prepared him for the greatest acting challenge of his career — holding his own against the legendary supporting cast he assembled for “Horace and Pete.” This is that rare show worth watching just for its performances. Among the talented ensemble, six-time Emmy winner Alan Alda and four-time Emmy champ Edie Falco are the stand-outs.

On “Horace and Pete,” he plays against type as “Uncle” Pete Wittel, a bigoted bully whom he described in a recent interview with Gold Derby as “sort of the world’s worst person.” He shines particularly in episode four. At 29 minutes, it is the shortest of the series but Alda has 13 minutes of screen time. The episode closes with the type of scene that wins Emmys: a suicidal Uncle Pete has a rare tender moment as he gives a speech about love to his biological son of the same name (Steve Buscemi).

She plays Sylvia Wittel, the sister of Horace (C.K.) and Pete (Buscemi) who run the family bar. Her character is introduced as an antagonist, determined to close the joint. She comes across as even more unlikeable than Uncle Pete, despite her having cancer. While Falco is absent from some of the early episodes her role increases when Sylvia becomes manager of the bar and Buscemi and Alda are less seen. Then with the introduction of her boyfriend Harold (played by Reg E. Cathey, who won the Emmy for Best Drama Guest Actor for “House of Cards” over Alda last year) and revelations about the sordid history of the bar, Sylvia turns into the heart of the show.

Cast in this light, Falco really shines. She is particularly sympathetic in the finale when she takes on a second role. In an extended flashback we see her as Sylvia’s mother Marianne, who ran away from her abusive husband with young Horace and Sylvia in tow but leaving Pete behind because she does not understand his mental health issues. With crying scenes for both characters, the finale is a strong Emmy submission for Falco as she clocks 25 minutes of screen time across its 52 minutes.

C.K., who released the series independently through his website, has mailed the complete season on DVD to Emmy voters, so they will have a chance to see Alda and Falco’s best work. Be sure to make your Emmy predictions right here. You’ll compete to win our contest prizes for best picks — $500 (first place), $300 (second place) and $200 (third place) in Amazon gift certificates — a place of honor on our leaderboard and a starring role in next year’s Top 24 Users (the two dozen folks who do the best predicting this year’s Emmy nominations). Be sure to read our contest rules.