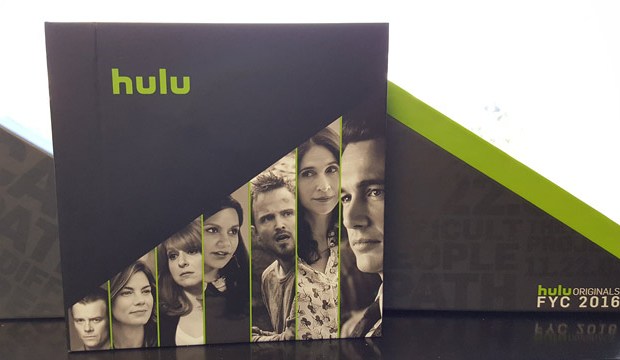 Hulu has emerged as a digital giant in the TV world and is now looking to land a sizeable footprint at this year’s Emmy Awards. The streaming network recently shipped its 2016 Emmy FYC package to all members of the TV academy showcasing its original programs. See photos above.

“The Path” stars three-time Emmy champ Aaron Paul (“Breaking Bad”) and has a four-page spread in the FYC Emmy booklet that includes the first six episodes from Season 1. Oscar nominee James Franco‘s limited series contender “11.22.63” scores a six-page layout, with all eight episodes of the program included on DVDs.

Other featured shows include Golden Globe-nominated comedy “Casual” and all 10 of its episodes, “Difficult People” starring Emmy nominee Billy Eichner and its eight episodes, and four episodes of Emmy-nominated “The Mindy Project” with Mindy Kaling. Along with the discs, Hulu made sure to send the TV academy members a private digital code where they can watch all its contenders online. Smart move.

Which Hulu original series do you think will break into this year’s Emmy race? After taking a tour through the photo gallery above, be sure to sound off in the comments section below or right here in our famous TV forums.