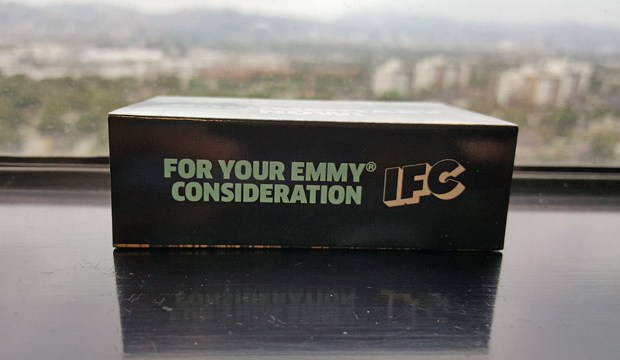 Cable network IFC is looking to dominate the Variety Sketch Series categories this year by sending Emmy Awards voters an assortment of its offering on a simple little thumb drive, including its Emmy winning “Portlandia” series. See photos above.

“Portlandia,” a parody series about life in Portland, Oregon, has racked up 14 total Emmy nominations over the past five years including a Best Supporting Comedy Actor nomination for star Fred Armisen back in 2014. The series has won three total Emmys: Best Costumes in both 2011 and 2013, and Best Production Design in 2015.

In addition to “Portlandia,” IFC hopes it can add new show “Documentary Now” to the Variety Sketch Series category this year. Hosted by Oscar winner Helen Mirren, the series is created by Armisen, Bill Hader, Seth Meyers and Rhys Thomas and spoofs celebrated documentary films with similar, but fictitious subjects.

Along with the thumb drive, IFC also encourages Emmy voters to go to its FYC website where they can view entries for other shows, including comedies “Maron” and “Todd Margaret,” variety sketch series “Comedy Bang Bang,” limited series “The Spoils Before Dying,” and short form series “Boxed In.”

Do you think IFC will dominate the Variety categories this year? Sound off in the comments section below or join the discussion right here in our TV forum.