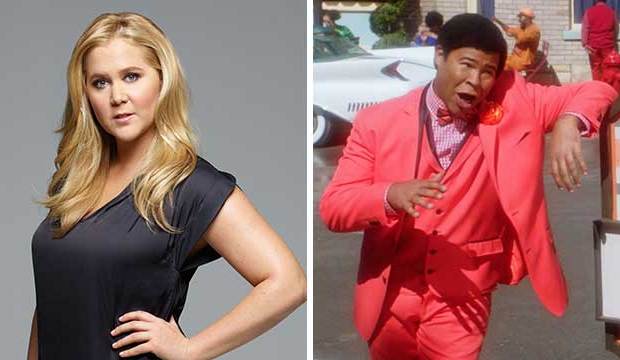 Last year “Inside Amy Schumer” won the Emmy for Best Music and Lyrics for “Girl You Don’t Need Make Up,” and the show could return to that race this year with “Closer to You.” Comedy Central could also grab another slot in the category with “Negrotown,” the showstopping musical number from last summer’s “Key and Peele” series finale. (Watch both videos below.)

“Girl You Don’t Need Make Up” was a boy-band parody in which a group of young heartthrobs insists that Schumer is beautiful just the way she is, only to quickly take it back: “Girl, you do need makeup, lots and lots of makeup. Think of a clown and then work your way back.” That was a feminist response to songs like One Direction‘s “What Makes You Beautiful,” in which the British pop stars insist that a woman’s most attractive quality is not believing she’s attractive.

“Closer To You” is a parody in the same vein. But this time Schumer is poking fun at pop songs about being obsessed with a man. “When you’re gone all I do is think about you,” it starts, but then it goes to its logical extreme: “Shove handfuls of creatine down my throat so we weigh the same … I think I’m forgetting how to be me, but I don’t care.”

“Closer to You” is written by Kyle Dunnigan, Christine Nangle, Jeremy Silver and Jessi Klein. Dunnigan was one of last year’s winning songwriters for “Girl You Don’t Need Makeup,” while Klein and Nangle are also on the show’s Emmy-nominated writing team.

“Negrotown” from “Key and Peele” is another socially relevant tune. It’s a fantasy sequence that imagines a utopia free of racism: “In Negrotown you can walk the street without getting stopped, harassed or beat, and there’s always a cab when you need to get around – and they always stop in Negrotown.” The satire ends with a touch of melancholy as Keegan-Michael Key‘s character discovers that Negrotown is not real and is arrested by a white police officer without cause.

“Negrotown” was written by Jordan Peele, Joshua Funk, Rebecca Drysdale, Colton Dunn and Phil Augusta Jackson. Funk and Drysdale were previously nominated for Best Music and Lyrics in 2014 for “Key and Peele’s” “Les Mis,” losing to Lin-Manuel Miranda and Tom Kitt for “Bigger!” from the Tony Awards telecast.

Comedy songs have done well in the past at the Emmys. Consider the recent victories for the “Saturday Night Live” tunes “Dick in a Box” (2007) and “Justin Timberlake Monologue” (2011), as well as “I’m Fucking Matt Damon” from “Jimmy Kimmel Live” (2008). Award shows are also frequent winners. The Oscars prevailed in 2009 for Hugh Jackman‘s opening number, and the Tonys recently won three in a row: “It’s Not Just for Gays Anymore” (2012), “If I Had Time” (2013) and the aforementioned “Bigger!”

‘Key and Peele’ final season: Will Emmy Awards honor it with a goodbye hug?

“Inside Amy Schumer” and “Key and Peele” should both be considered strong contenders, not just because of their previous track record in the category but because of the ever-rising profiles of the shows and their stars.

“Inside Amy” won Best Variety Sketch Series last year and had seven total nominations. “Key and Peele” also had seven nominations last year, though it has yet to win in any category – this year is the TV academy’s last chance to honor the acclaimed comedy duo, so their show’s closing number might be the perfect opportunity to do so.

Do you think either song will win Best Music and Lyrics at the Emmys? Watch them below and discuss this season’s best TV songs in our forums.