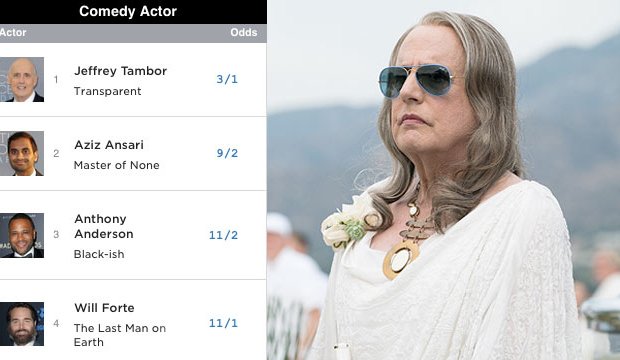 Hey, Jeffrey Tambor: Do you have another Emmy speech ready for “Transparent”? According to the predictions of our Emmy Awards experts — journalists from major media outlets like TV Guide, Variety and Yahoo — he will win his second consecutive Best Comedy Actor trophy for playing transgender woman Maura Pfefferman on the Amazon dramedy. Just last year this TV legend won his first-ever Emmy Award after previously having lost four times for “The Larry Sanders Show” (1993, 1996-1998) and twice for “Arrested Development” (2004-2005).

There were seven nominees in theÂ Best Comedy Actor category last year due to a tie in the nominations phase, up from the normal six. They were:Â Anthony Anderson (“Black-ish”), Louis C.K. (“Louie”), Don Cheadle (“House of Lies”), Will Forte (“The Last Man on Earth”), Matt LeBlanc (“Episodes”), William H. Macy (“Shameless”) and Tambor. Six of the seven nominees are eligible again this year, save for C.K. who took the year off from “Louie” to do his dramatic web series “Horace and Pete.”

All 15 of our Emmy experts are predicting Tambor to earn a nomination, while 14 think he’ll prevail. The lone holdout is Don Kaplan (New York Daily News), who has Tambor in his #3 position behind both Rob Delaney (“Catastrophe”) and Gael Garcia Bernal (“Mozart in the Jungle”).

This overwhelming support for Tambor translates to leading 3/1 racetrack odds to win Best Comedy Actor. Following him on our experts’ chart is Aziz Ansari (“Mozart in the Jungle”) in second place with 9/2 odds, Anderson in third place with 11/2 odds and Forte in fourth place with 11/1 odds. See more of our experts’ odds and rankings right here.

Who do you think will win Best Comedy Actor at the 2016 Emmy Awards? Make your predictions now to be eligible to win our contest prizes ($500 for first place, $300 for second, $200 for third) and then sound off at the bottom of this post or right here in our famous TV forums.