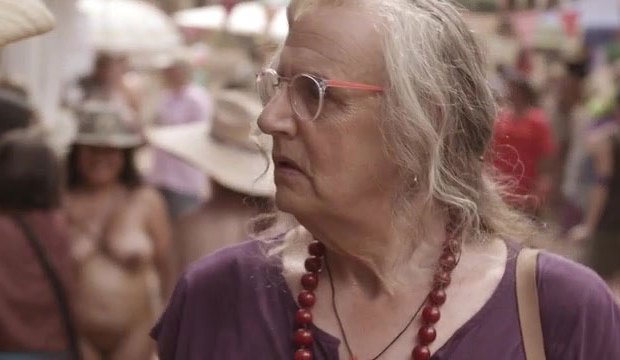 Jeffrey Tambor is the overwhelming favorite to win a second consecutive Best Comedy Actor Emmy for his work as Maura Pfefferman in season 2 of Amazon’s critically acclaimed “Transparent.” However, while is the top pick for the majority of our Emmy experts (journalists who cover this awards beat year-round), he still needs to submit a strong submission to Emmy judges to secure that second win. The ninth episode “Man on the Land,” written by Ali Liebegott, is easily his best option. Indeed, New York Times scribe Rachel Syme called this “the season’s best episode; it may very well be one of the best episodes of television made all year.”

Find out how “Transparent” will fare at the Emmys — Click here

Maura travels with her daughters Ali (Gaby Hoffman) and Sarah (Amy Landecker) to a “girls only” weekend at the Idyllwild Wimmin’s Music Festival. Initially, Maura is elated at the sense of belonging that she feels as she dances joyfully with her daughters amongst the crowd of women to “Hammer and a Nail,” performed by The Indigo Girls. Later, Maura is told by Vicki (Oscar winner Anjelica Huston) that the festival has a strict policy allowing only “women born women.” This echoes a real-life controversy involving the Michigan Womyn’s Music Festival).

Suddenly, Maura is once again an outsider. She wanders the festival looking for her daughters,becoming increasingly paranoid that everyone is staring at her. When she finds Ali at a campfire with Leslie (Tony and Emmy champ Cherry Jones), a heated debate erupts centered on acceptance of transgender women. Maura ends up leaving the camp, all the while shouting “Man on the Land.”

Tambor is the emotional center of the episode. He shows plenty of range as Maura goes from complete happiness and liberation to paranoia and insecurity before settling on outright anger. We feel Maura’s discomfort and disappointment that she is still considered an outsider even in this apparent feminist utopia. In the final scenes, Tambor has two strong moments of impact: Maura arguing for her right to be at the festival and making a spectacle of herself as she leaves the camp.