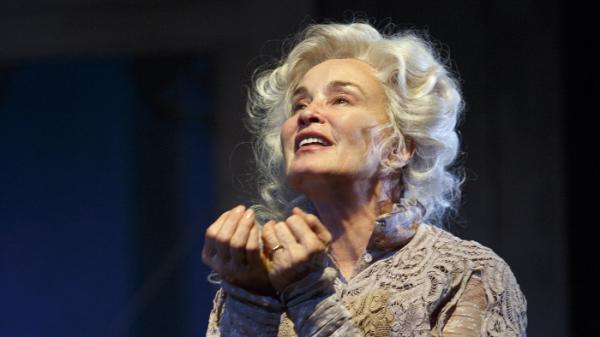 We are predicting that Jessica Lange will win the Tony Award for Best Actress (Play) for her heartbreaking performance as the drug-addicted Mary Tyrone in Eugene O’Neill‘s “Long Day’s Journey Into Night,” which is currently packing them in at the American Airlines Theater on Broadway. If Lange prevails on  June 12, she will join a group of 21 thespians who have won the Triple Crown. No, there is no horse racing involved in this honor. Rather, it refers to performers who have claimed each of the three major awards for achievement in American theater, television and film: the Tony, the Emmy and the Oscar.

Redgrave gained entry to this august body with her Tony win for the 2003 revival of “Long Day’s Journey.” The play hit so close to the bone that O’Neill refused to let it be performed until after his death in 1953. The original Broadway production won Best Play in 1957 and Florence Eldridge, who originated the role of Mary Tyrone which O’Neill based on his mother, contended for Best Actress (Play); she lost to Margaret Leighton (“Separate Tables”).

Make your Tony Awards predictions — CLICK HERE
Win $100, top spot on our leaderboard & a place in next year’s Top 24

This marks only Lange’s third time on the rialto. Never one to play it safe in her career, she’s chosen three of the most iconic, complex and risky roles in theatre for her Broadway appearances. She first tackled Blanche in Tennessee Williams’ “A Streetcar Named Desire” back in 1992 and then Amanda Wingfield in his landmark play “The Glass Menagerie” in 2005. Having done a turn as Maggie in a 1984 TV adaptation of “Cat on a Hot Tin Roof,” she is the only actress to have taken on all three of William’s major heroines in such high-profile productions.

With those Williams’ plays, she was compared unfavorable to the original performers, Jessica Tandy and Laurette Taylor. Not one to give up, she reprised each of those roles in London’s West End where she was greeted with a far better reception having had time to examine and grow into the roles. This time around, she reversed her usual travel pattern. She first played the part of Mary Tyrone in an acclaimed 2001 production in the West End and became the first American to reap a bid for Best Actress (Play) at the Olivier Awards; she lost to Julie Walters in a revival of Arthur Miller‘s “All My Sons.”

At the Tonys, Lange faces tough competition from three-time Emmy champ Laurie Metcalf (“Misery”), Oscar winner Lupita Nyongo (“Eclipsed”), Tony winner Sophie Okonedo (“The Crucible”) and Oscar nominee Michelle William (“Blackbird”). A win would put Lange into a four-way tie among the Triple Crown winners — with Booth, Mirren and Smith — for most awards (six) as she already has two Oscars and three Emmys.

For those who know Lange only from the “American Horror Story” franchise, here’s a quick review of her awards history. She kicked off this phase of her career auspiciously in 1982 when she became the first double Oscar nominee in 39 years for her leading role in “Frances” and supporting turn in “Tootsie. She won for the latter, although many saw this as a consolation prize for losing in lead for her searing performance as the mentally tortured actress Frances Farmer to Meryl Streep who prevailed for playing a holocaust survivor in “Sophie’s Choice.”

Lange racked up three more Best Actress Oscar nominations in just seven years: “Country” in 1984 when Sally Field won for “Places in Heart”; “Sweet Dreams” in 1985 when Geraldine Page won for “A Trip to Bountiful”; and “Music Box” in 1989 when Jessica Tandy scored her Triple Crown with a win for “Driving Miss Daisy.” Lange won the Best Actress Oscar in 1994 for “Blue Sky.” She began her Emmy run in 2009 with a win for her lead role in the telefilm “Grey Gardens” followed by victories in 2012 for her supporting turn in the original “American Horror Story” limited series and her star turn in the 2014 edition “Coven.”

Make your Tony predictions HERE.  You’ll compete to win our contest prize for best picks — $100 in Amazon gift certificates — a place of honor on our leaderboard and a starring role in next year’s Top 24 Users (the two dozen folks who do the best predicting this year’s Tony winners). Be sure to read our contest rules.

Where are the Kennedy Center Honors this year and who deserves to be selected in 2021? [PHOTOS]

40 actresses who played actresses for Oscar wins or nominations, including Renee Zellweger, Cate…

Scarlett Johansson at Oscars: 11 performers who got lead and supporting nominations in the same year

Emmy episode analysis: Jessica Lange ('AHS: Apocalypse') is back as Constance Langdon in 'Return to…

Emmy eye-popper: Why is 'American Horror Story: Apocalypse' in drama categories instead of limited…