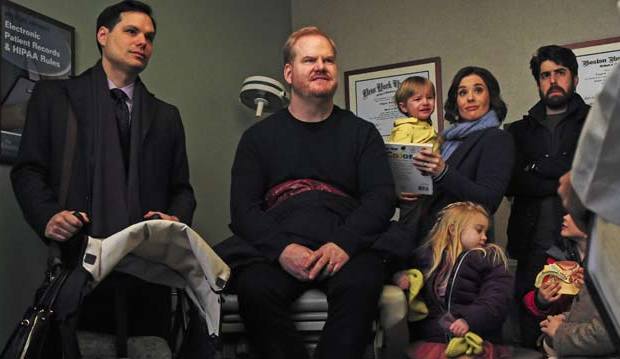 TV Land‘s “The Jim Gaffigan Show” was a long time coming. “Over 100 years ago Jeannie and I were approached by FOX to do an animated show,” reveals comedian Jim Gaffigan of the sitcom’s origins. during a recent Emmy event at New York’s Museum of Natural History. The funnyman was joined on the panel by his wife and co-writer Jeannie Gaffigan as well as co-stars Ashley Williams and Michael Ian Black.

Ten years after being approached by FOX, “we had a development deal at NBC for a version of this show, and then we went to CBS and did two versions of it,” said Jim. “Then we were approached by Doug Herzog, who at the time was overseeing TV Land, and he said he wanted to do it, and he agreed to let Jeannie and I do the show we wanted.”

The series is semi-autobiographical, following Jim and his wife Jeannie (played on-screen by Williams) as they balance his comedy career with their five children. It’s a tricky balance in real life as well, with the show’s hectic schedule requiring compromises at home, but Jeannie explained that the show also benefits from “the influence of the wildness of having kids and the ridiculous situations we find ourselves in … all of our experiences wind up getting shared with everybody. So it’s frustrating, but it’s also kind of a beautiful thing to be honest with your writing.”

Casting Jeannie’s on-screen counterpart was also a challenge. “We had seen 200 people between New York, California and Chicago,” said Jeannie, but “when Ashley came in … I really believed she was kooky enough to have five kids.”

That was partly because Williams was still frazzled after an embarrassing experience: “I had just walked into the men’s room and done a full face of makeup with two men in the stalls, and I didn’t know they were in there. They both came out at the same time – and this is three minutes before I walked into my audition – so I was on an adrenaline rush because I just started screaming … My hands were still shaking because I was mortified.”

Sutton Foster in ‘Younger’: Will Tony champ win an Emmy for NOT acting her age?

“You can go to jail for that in North Carolina now,” joked Black, who plays Jeannie’s best friend Daniel. That role was challenging to cast as well, not because it was difficult to find the right actor but because “the network didn’t want to cast me,” Black said.

That’s because he was pigeon-holed as a different kind of comedian. Jim clarified, “We all get in these perception ghettos. Michael is perceived as a sketch guy. I’m perceived as a model.”

Will Jim Gaffigan and company soon be perceived as Emmy nominees? The first season of “The Jim Gaffigan Show” aired last summer, and it returns for its second season on TV Land on June 19. Make sure to join the discussion of all things TV going on in our forums.