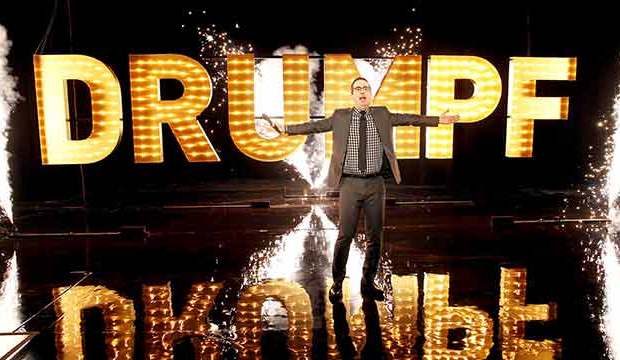 The three shows that owned the variety series award at the Emmys for the past 18 years have all signed off. “The Daily Show with Jon Stewart” won last year after having its 10-year streak  broken by two wins for “The Colbert Report.” And “The Late Show with David Letterman” claimed five in a row beginning in 1998. Will that void be filled by Stewart’s protege John Oliver?

The sophomore season of his HBO show “Last Week Tonight with John Oliver” contended in the newly-named category of Best Variety Talk Series last year. The other nominees still in contention are “Jimmy Kimmel Live” and “The Tonight Show Starring Jimmy Fallon.”

Oliver’s weekly show is the one with the buzz. It is coming off of Best Talk Show wins at both the PGA and Critics’ Choice Awards in January. Last summer, the Television Critics Association named it Best Achievement in News & Information over the likes of “60 Minutes,” “CBS Sunday Morning” and “Frontline.” And it was honored with a Peabody last spring.

One of the signature segments on the show is when Oliver rants on hot button issues. A weekly rather than daily take (as done many of his competitors) gives Oliver and his writers one chance to wrap up all of their thoughts and opinions into one blazing topic. That could be why they won the WGA award in 2014 and were nominated at last year’s Emmys (the Fallon and Kimmel teams were snubbed after previous bids).

Oliver is spoilt for choice as to which episode to submit to Emmy voters. Among my favorites are those where he focused on sex education in America, public financing of stadiums, the current status of transgender rights in America, and the representative limbo for the citizens of Washington, D.C. (the latter is very close to my heart being a resident in question). In terms of what would really resonate with Emmy voters, though, Oliver does have two standout options:

The first is his epic takedown of Donald Trump that he did on February 28. His step-by-step breakdown of Trump, topped off with the launch of his “Make Donald Drumpf Again” campaign, has all the hallmarks of Jon Stewart‘s infamous Glenn Beck parody from years ago. With presidential politics on the minds of many, it could be exactly the type of subject that would make a strong impression.

The other episode that would probably shine at the Emmys is the one he did last September on the huge influx of migrants into Europe. It’s particularly moving because Oliver highlights one specific girl, Noujain Mustaffa, who dreams of being an astronaut and had learned to speak English watch from watching “Days of Our Lives.” The segment then culminates with her favorite characters from the soap, E.J. DiMera (James Scott) and Sami Brady (Alison Sweeney), reuniting and singing her praises while also attacking those who have fought against the migrants.

Oliver was a correspondent and writer for “The Daily Show” starting in 2006. He won three writing Emmys in 2009, 2011, and 2012 working under Stewart. His own HBO show won the variety award from the Writers Guild in 2014