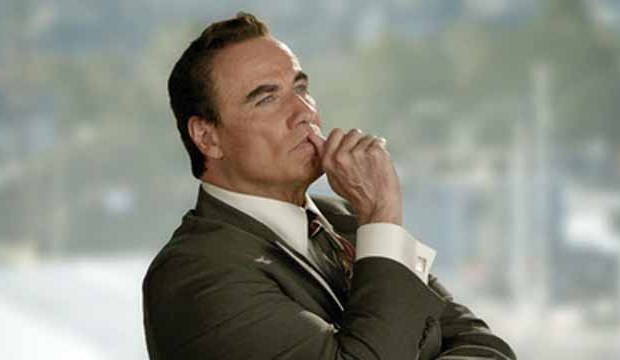 It is quite surprising that more people aren’t predicting John Travolta to win an Emmy as Best Movie/Limited Series Supporting Actor for his riveting portrayal of Robert Shapiro in “The People v. O.J. Simpson.” After all, one need only review recent Emmy trends for that category to see that he is the obvious choice to take home the award on September 18. Quite simply, voters love to reward veteran actors in this race, especially if they have been Oscar nominees.

Current Gold Derby expert predictions have Travolta’s co-star Sterling K. Brown is in first place with 10/11 odds. He is followed by Jesse Plemons (“Fargo”) at 23/10, Hugh Laurie (“The Night Manager”) at 12/5 and then, shockingly, Travolta in fourth at 6/1. Rounding out the roster are Bokeem Woodbine (“Fargo”) at 20/1 and David Schwimmer (“People”) at 40/1. Travolta is the only Oscar nominee among the six nominees this year with Best Actor bids for “Saturday Night Fever” (1977) and “Pulp Fiction” (1994).

The other three Emmy champs this decade had long-running film and television careers as well as an awards pedigree. Ken Howard (“Grey Gardens,” 2009) was a Tony Award winner and was SAG President during Emmy voting that year. Guy Pearce (“Mildred Pierce,” 2011) had starred in several Oscar nominees and/or winners such as “L.A. Confidential,” “Memento,” “The Hurt Locker,” and “The King’s Speech.” And Martin Freeman (“Sherlock: His Last Vow,” 2014), who was a double Emmy nominee that year (also for “Fargo”), was also starring in the blockbuster “The Hobbit” film franchise.

Brown is a relative newcomer, especially to the awards game. A win for him would be contrary to what Emmy voters generally like in this particular category. The same for Plemons and Woodbine, and to some extent Schwimmer (he was an Emmy nominee in 1995 for “Friends.” You have to go back 22 years to 1994 to find a non-veteran actor winning this category (Michael Goorjian for “David’s Mother”).

If not Travolta, the only other nominee in this supporting actor category with the kind of pedigree that voters have historically chosen is Laurie. This year marks his eighth career nomination (all previous for acting and producing on the medical drama “House”) with no wins so far.