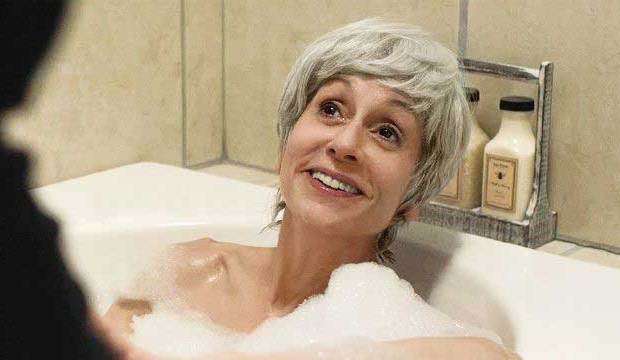 After submitting the “Transparent” episode “Flicky-Flicky-Thump-Thump” for voters, is Comedy Supporting Actress contender Judith Light poised to win her first Primetime Emmy? This two-time Daytime Emmy winner (“One Life to Live,” 1980, 1981) contended here once before for her recurring guest role on “Ugly Betty” back in 2007. On Amazon’s acclaimed comedy series “Transparent,” she plays Shelly Pfefferman, a woman whose ex-husband (Jeffrey Tambor) has recently revealed that he is transgender and is now known as Maura.

SYNOPSIS
Still lonely after the death of her second husband, Shelly is delighted when Maura moves in with her. While getting ready for a party, Shelly asks Maura to do something she hasn’t done since they were married and join her in the bathtub. They show up to their family home together, inspiring gossip from their kids — Ali (Gaby Hoffmann), Sarah (Amy Landecker), and Josh (Jay Duplass) — who organized the poolside event to launch his latest music group. All is well until Sarah’s embittered ex Tammy (Melora Hardin) storms in to give the family a piece of her mind, throwing the rest of the still-fresh cake from their recent wedding into the water.

Can Light win for this episode? Let’s check out the pros and cons:

PROS
Light provides “Transparent” with much of its comedy, and a great deal of its heart. She gets big laughs when she’s railing against her nosy neighbors and giving Maura beauty tips. Yet underneath it all there’s a real tenderness to Shelly’s acceptance of her ex’s life decision, and in her need to reconnect. It’s all beautifully conveyed in that bathtub scene, with its themes of gender fluidity, emotional distance, and the sexuality of older people.

Voters love it when actors completely transform themselves for a role, and that’s certainly what Light does here: she’s barely recognizable, not just in appearance, but in personality as well.

Besides those two Daytime Emmys, Light made Tony history Awards with her consecutive wins for featured roles in “Other Desert Cities” (2012) and “The Assembled Parties” (2013) and is long overdue for a win at the Primetime ceremony.

Transgender issues remain in the headlines. Light, a longtime LGBT activist, has certainly been vocal in interviews, which could further inspire voters to cast their ballots for her.

CONS
To say that Hardin steals the show with her manic, drunken meltdown would be an understatement. She wisely submitted this episode to Emmy voters and snagged a Comedy Guest Actress nomination. Will she overshadow Light?

Competition from costar Hoffmann could lead to vote splitting, swinging the prize to either reigning two-time champ Allison Janney (“Mom”) or one of the other nominees who has yet to win: Anna Chlumsky (“Veep”), Kate McKinnon (“Saturday Night Live”), or Niecy Nash (“Getting On”).

It’s too bad we’re not under the old system where supporting players submitted two episodes, as Light’s best moments are spread throughout the season.