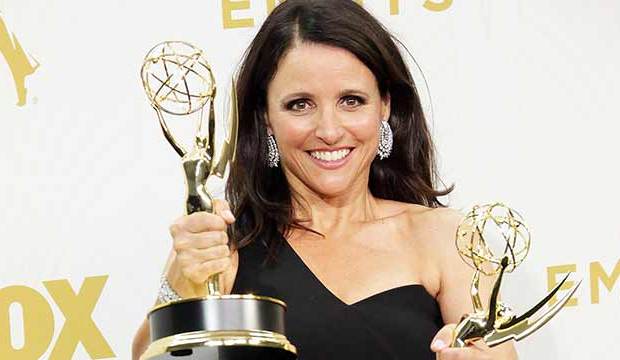 In last week’s season premiere of HBO’s “Veep,” President Selina Meyer (Julia Louis-Dreyfus) was scrambling to hold on to her title amid a history-making tie in the Electoral College. Dreyfus is in a similar (but much happier) predicament at this year’s Emmy Awards. She has the opportunity to break or tie three historic records.

Louis-Dreyfus has won four consecutive Emmy Awards for playing Meyer on the political comedy, which also won its first trophy for Best Comedy Series last year (giving her a producing Emmy as well). If “Veep’s” fifth season lands her in the winner’s circle again this time, she will smash two Emmy records and put herself in prime position to tie a third. Let’s take a look at which ones are on the line for 2016.

Most Consecutive Wins for Best Comedy Actress:
Like Louis-Dreyfus, Helen Hunt had her own Emmy streak of four straight wins back in the 1990s. Hunt owned this category from 1996-1999 for playing Jamie Buchman in “Mad About You.” A fifth consecutive win for “Veep” this year would break Louis-Dreyfus’ tie with Hunt.

Most Overall Wins for Best Comedy Actress:
In addition to the four Emmys for “Veep,” Louis-Dreyfus owns another statuette in this category thanks to “The New Adventures of Old Christine” (2006). That overall total of five wins has already tied with two TV legends: Candice Bergen prevailed five times for her title role in “Murphy Brown” (1989-1990, 1992, 1994-1995); and Mary Tyler Moore received five trophies for her roles on “The Dick Van Dyke Show” (1964, 1966) and “The Mary Tyler Moore Show” (1973, 1974, 1976). With a sixth win in this category, Louis-Dreyfus would have sole bragging rights as Emmy’s most honored leading comedy actress.

Most Wins for Acting:
Counting up her wins for “Veep” (four), “Old Christine” (one) and “Seinfeld” (one for Best Supporting Actress of 1996), that brings her career tally to six. If she wins one more, she’ll tie Mary Tyler Moore, Ed Asner and Allison Janney for having the second-most Emmys for performances. Cloris Leachman reigns over all of them with eight.

Does Louis-Dreyfus have a shot at making more Emmy Awards history this year? As President Meyer might say, “@$%* yes!”