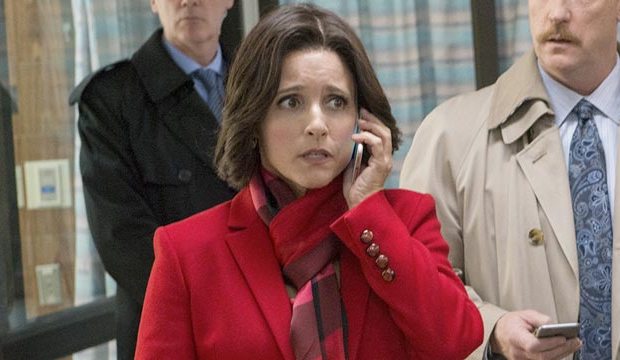 Julia Louis-Dreyfus has won four Emmy Awards in a row for Best Comedy Actress for “Veep,” just one shy of Candice Bergen‘s (“Murphy Brown”) record of five category wins for the same character. However, not even Bergen was able to pull off the feat five years running (1989, 1990, 1992, 1994, 1995), which means Louis-Dreyfus is within striking distance of claiming a new Emmy record. Is her Emmy episode submission “Mother” strong enough for Louis-Dreyfus to enter the record books?

SYNOPSIS
This fourth episode of Season 5 begins with President Selina Meyer (Louis-Dreyfus) giving a speech reminding people that she earned more than 50% of the popular vote in the general election. When Gary (Tony Hale) informs her that her estranged mother is in hospital after a stroke, her staff forces her to visit. At the hospital, Selina meets her ex-husband and his new girlfriend, of whom she’s immediately jealous. In the hospital chapel, Selina and Gary pray for her mother’s suffering to go away, and then Selina slips in that she hopes she wins the presidential election.

When her mother passes away, Selina learns that the Nevada election recount will continue and bursts into laughter just as her daughter (Sarah Sutherland) comes into the room, upset that she wasn’t there when they pulled the plug. However, just as she’s about to give the eulogy, Selina learns that she lost the Nevada re-vote, thereby losing the popular vote. “I have lost … so much,” she says blubbering tears at the podium.

PROS
The TV academy just can’t get enough of Louis-Dreyfus. She has been nominated for 17 Emmys as an actor for three different shows, winning at least once for each of them: “Seinfeld” in 1996, “The New Adventures of Old Christine” in 2006 and “Veep” from 2012-2015. When you add in her five producing bids for “Veep,” her Emmy noms total is a jaw-dropping 22.

The emotional range that Louis-Dreyfus showcases as Meyer over the course of this episode — which was also recognized for both writing and directing — is remarkable. In lesser hands, Selina could easily become a caricature rather than a well-rounded character.

“Veep” may sweep. Last year’s Best Comedy Series winner is now the laffer with the most nominations this year, at 16. Expect many of the actors, writers, directors and below-the-line talents to go along for the ride.

CONS
Naysayers might say that it’s someone else’s turn in the spotlight, but Emmys have a knack for rewarding the same people over and over again. Hoping to hear their names called instead are Ellie Kemper (“Unbreakable Kimmy Schmidt”), Laurie Metcalf (“Getting On”), Tracee Ellis Ross (“Black-ish”), Amy Schumer (“Inside Amy Schumer”) and Lily Tomlin (“Grace and Frankie”).

Speaking of Metcalf, back in the 1990s when she was up for “Roseanne” and Louis-Dreyfus was in the running for “Seinfeld,” Metcalf beat her three times in a row (1992-1994). Will Metcalf once again take down the comedy queen?

After five years, voters may have finally grown tired of Selina’s shrewd and unlikable demeanor.