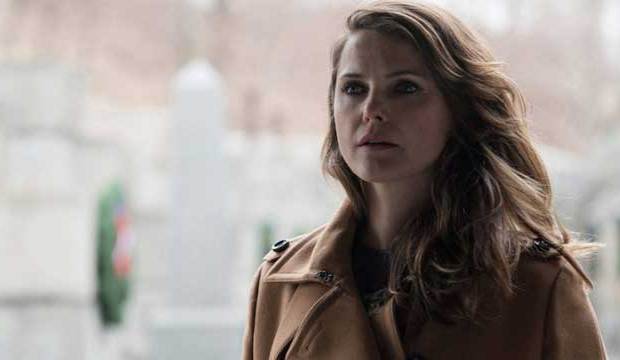 After 25 years on television, Keri Russell earned her first Emmy nomination this year for her role as Elizabeth Jennings on “The Americans.” It took Emmy voters four seasons to finally catch on to her critically acclaimed performance as a covert KGB spy living in America in the early 1980s. Russell is nominated alongside her on-screen husband (and off-screen partner) Matthew Rhys and both have submitted one of the highlight episodes of season four, “The Magic of David Copperfield V,” which was directed by Rhys.

SYNOPSIS
The Jennings have hit their breaking point. Their long-term mission has caught up with them as the FBI get closer to discovering who they are. Gabriel (Frank Langella), the Jennings’ KGB handler, decides that Elizabeth and Philip need a break. Broken, battered and exhausted, they take the kids on a vacation to Epcot. The episode jumps ahead seven months, where things seem to have gone back to normal for the Jennings, who are back in the swings of things as KGB agents, having enlisted their reluctant daughter Paige (Holly Taylor) to follow in their footsteps.

Can Russell win her first Emmy? Let’s take a closer look at her submission:

PROS
While her performance is often brooding and understated, there are moments of impact when emotions run high. In the hallway of their ordinary suburban home, Elizabeth loudly scolds her husband during an argument. On another mission, she ruthlessly smashes a glass bottle over the head of another contact. Russell is also impressive in a key scene in which Paige confronts her mom about not wanting to monitor Pastor Tim (Kelly AuCoin), but Elizabeth doesn’t want to hear excuses. As Paige shrugs her off, Elizabeth ferociously scolds her and orders her to do what she is told. “Thanks to what you did, that is all that stands between us and this family being destroyed!” she screams. The camera zooms in on her face, veins swelling in her forehead, eyes burning with anger and defiance. This scene alone could propel Russell to the front of the pack in this race.

Actors voting in this category will respond to the intensity that Russell brings to this role as she executes various missions while evading the FBI. Her character use a variety of wigs and costumes as she goes undercover to achieve various outcomes to advance their cause. In this episode, Elizabeth poses as Patti, a needy single woman who has befriended effervescent cosmetics saleswoman Young-Hee (Ruthie Ann Miles) in an attempt to obtain critical information through Young-Hee’s husband. Russell has to play a completely different persona, which demonstrates her range as an actress. Her vulnerability as this woman is so effective and believable; it has to be because Elizabeth’s overriding mission depends on her being able to get close enough to people to extract the information she needs.

Elizabeth regrets how she has used Young-Hee and for much of the episode this sense of regret and guilt weighs on her, which comes through on the pained and exhausted expressions on her face.

CONS
Russell is the rookie nominee among reigning champ Viola Davis (“How to Get Away With Murder”), past two-time category winner Claire Danes (“Homeland”), and returning nominees Robin Wright (“House of Cards”), Taraji P. Henson (“Empire”) and Tatiana Maslany (“Orphan Black”). She might have to wait until next year if voters want to award one of these other actresses who are all returning to claim this prize.

Although “The Americans” really broke through with Emmy voters this year with five nominations including for Best Drama Series, there may be a sense that the show still isn’t quite an all-out Emmy favorite.