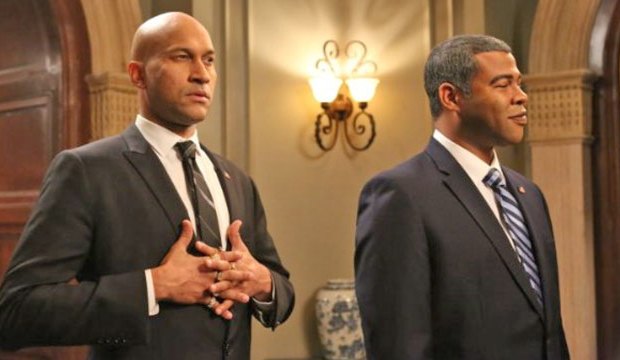 Comedy Central’s “Key and Peele” ended their run last summer after five seasons, and a farewell hug from Emmy Awards voters may be on the horizon for the acclaimed comedy duo of Keegan-Michael Key and Jordan Peele. After a strong showing at the Emmys last year with seven nominations, will they finally take home some hardware? Don’t forget, “Breaking Bad” and three of its actors (Bryan Cranston, Aaron Paul, Anna Gunn) won awards for their final season and most notably Jon Hamm (“Mad Men”) won last year after being skipped over for all of his multi-Emmy winning show’s previous seasons.

“Key and Peele” was pretty much ignored for its first few seasons by the TV academy, but last year when the Variety Series category was split into two groups — Best Variety Sketch and Best Variety Talk — the sketch stars found their sweet spot and earned seven bids including best series, writing and a supporting actor nom for Key.

While the Emmys do allow sketch actors to be nominated in the comedy acting categories, so far none have prevailed including Key who lost to Tony Hale (“Veep”). Despite the many nominations “Saturday Night Live” has earned in this category, none of their performers from Amy Poehler to Kate McKinnon have been able to beat out their sitcom competition. Will Key or Peele finally change all of that?

“Key and Peele” could also be helped in gaining nominations this year thanks to the duo’s current big screen film “Keanu.” Last year’s inaugural Best Variety Sketch winner, “Inside Amy Schumer,” may have been aided by the success of Schumer’s film “Trainwreck.” A similar pattern could occur this year, helping “Key and Peele” say farewell to a successful five-year run on TV with some Emmy recognition.