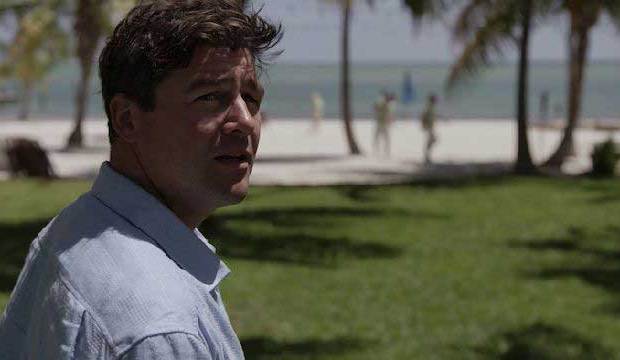 Kyle Chandler won his first Emmy as Best Drama Actor for the series finale of “Friday Night Light” in 2011. Could he take home a bookend for the second season finale of “Bloodline”? He plays John Rayburn on this Netflix series, a police detective who will do anything to protect his prominent Florida keys family, even if it means killing his black sheep older brother Danny (Ben Mendelsohn) and covering it up. He was nominated last year for the freshman edition of this drama, losing to Jon Hamm who finally won for the final season of “Mad Men.” He has submitted “Part 23” to Emmy voters.

SYNOPSIS
Diana (Jacinda Barrett) pressures John for the truth about Danny’s death, but he’s got bigger fish to fry: his partner, Marco (Enrique Murciano), is trying to get immunity for Danny’s old pal Eric O’Bannon (Jamie McShane) who has valuable information about the case, and Ozzy (John Leguizamo) is still trying to extort money from him. Things come to a head during a tense roadside meeting with Meg (Linda Cardellini) and Kevin (Norbert Leo Butz). They both wanted Danny dead, John argues, and since he’s the one always having to fix the family’s problems, he had no other choice. Meg and Kevin leave in disbelief, contending that although they are guilty of the coverup, the murder was all John’s doing.

Later, John takes Eric to a dilapidated shack, intent on killing him. Yet he just can’t bring himself to pull the trigger, knowing perhaps that there’s no way he can cover up another murder. When last we see John, he’s fleeing the keys, leaving his siblings to clean up the mess he genuinely believes he didn’t create.

Can Chandler win for this episode? Let’s look at the pros and cons:

PROS
This season sees John Rayburn giving into his dark side, desperate to protect the golden boy image he’s so carefully created. It’s a stark departure from Chandler’s folksy, noble football coach in “Friday Night Lights,” and showing off this kind of range could be enough to push the actor to his second win.

Chandler has two explosive scenes: the roadside confrontation with Meg and Kevin, and his final face-off with Eric. His manic monologue to his siblings especially is the kind of thing Emmy voters have gone for in the past, so why should now be any different?

One of the most well-liked actors working today, Chandler is also the only nominee to have won in this category before, perhaps giving him an advantage over rivals Rami Malek (“Mr. Robot”), Bob Odenkirk (“Better Call Saul”), Matthew Rhys (“The Americans”), Liev Schreiber (“Ray Donovan”), and Kevin Spacey (“House of Cards”).

CONS
For the second year in a row, Chandler and Mendelsohn are the only nominees from the show. Does this hint at a lack of support from the TV academy overall?

The fact that Chandler has won before might actually hurt more than help: will voters want to reward a fresh face instead?