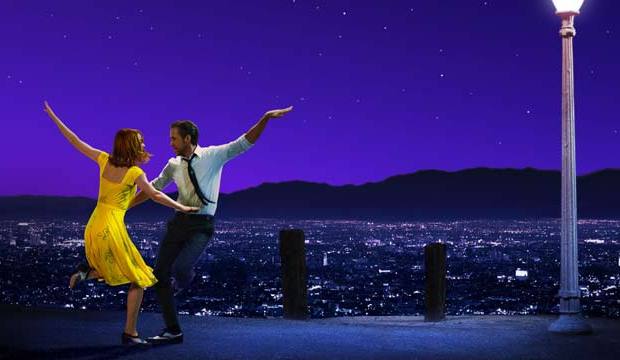 Sound unlikely? Well, when Gold Derby’s prediction center opened, our initial racetrack odds declared “La La Land” the frontrunner instantly in six of its seven categories. Currently the only category it is expected to lose is Best Screenplay to “Manchester by the Sea” (Kenneth Lonergan), but at the Critics’ Choice Awards on December 11 “La La Land” and “Manchester” tied for the writing award, so we could be in for a close race there, too.

The current Golden Globe record for most wins is six and is held by two films: “One Flew Over the Cuckoo’s Nest” (1975) and “Midnight Express” (1978).

“One Flew Over the Cuckoo’s Nest” pulled off a clean sweep of its six Globes categories: Film Drama, Director (Milos Forman), Film Drama Actress (Louise Fletcher), Film Drama Actor (Jack Nicholson), Screenplay (Lawrence Hauben and Bo Goldman) and Male Acting Debut (Brad Dourif). At the Oscars it would go on to win the same awards — save Acting Debut, which the Oscars don’t give out. Although it was nominated in an additional four categories it was unable to win any additional Oscars: Dourif lost Supporting Actor to George Burns (“The Sunshine Boys”); cinematographers Haskell Wexler and Bill Butler would lose out to “Barry Lyndon” (John Alcott); editors Richard Chew, Lynzee Klingman and Sheldon Kahn lost to “Jaws” (Verna Fields); and its original dramatic score by Jack Nitzsche also lost out to “Jaws” (John Williams).

“Midnight Express” didn’t sweep like “One Flew” did; its six wins were out of eight nominations. It claimed Film Drama, Film Supporting Actor (John Hurt), Screenplay, (Oliver Stone), Original Score (Giorgio Moroder), Female Acting Debut (Irene Miracle) and Male Acting Debut (Brad Davis). The two Globes it lost were Film Actor (Davis) and Director (Alan Parker). But despite its dominance at the Globes “Midnight Express” would only go on to win two Oscars: Adapted Screenplay and Score. The academy’s choice for Best Picture instead that year was “The Deer Hunter.”

Even if “La La Land” were to lose two of it Globe categories, that would still put it in elite company. Only four other films have ever won five Globes: “Doctor Zhivago” (1966), “Love Story” (1971), “The Godfather” (1972) and “A Star is Born” (1976). But when it comes to forecasting the Oscars, as we saw with “Midnight Express,” sweeping the Globes is no guarantee of equal academy results.

“Love Story” went five for seven at the Globes, winning Film Drama, Director (Arthur Hiller), Film Drama Actress (Ali MacGraw), Screenplay (Erich Segal) and Original Score (Francis Lai). It was also nominated for Film Drama Actor (Ryan O’Neal) and Film Supporting Actor (John Marley). But it could only translate one of those victories into Oscar gold: Original Score. “Patton” ended up being the academy’s choice for Picture and Director despite losing those races to “Love Story” at the Globes.

Then there’s “A Star is Born,” which won the Golden Globes for Film Comedy/Musical, Film Comedy/Musical Actor (Kris Kristofferson), Film Comedy/Musical Actress (Barbra Streisand), Original Score (Paul Williams and Kenny Ascher) and Original Song (“Evergreen” by Streisand and Paul Williams). But at the Oscars it only would win Original Song and was nominated for just three additional awards: Cinematography (Robert Surtees), Sound (Robert Knudson, Dan Wallin, Robert Glass and Tom Overton) and Best Song Score (Roger Kellaway). The academy snubbed “A Star is Born” for Picture (“Rocky” would go on to win); Actor and Actress.

Make your Golden Globe predictions now; change them till Jan. 8

How do you think “La La Land” will perform compared to those films? Make your Golden Globes Awards picks now and tell industry insiders which films and performers you have out front to win on January 8. You can keep changing them until just before show time. Be sure to make your predictions right here. You’ll compete for a place of honor on our leaderboard and a starring role in next year’s Top 24 Users (the two dozen folks who do the best predicting this year’s nominees). Read our contest rules.

Emma Stone ('Maniac') at Emmy FYC event: 'Near the end it got insane' playing an assassin, an elf, a con…

How many times have both Best Actress and Best Supporting Actress gone to the same film at the Oscars?