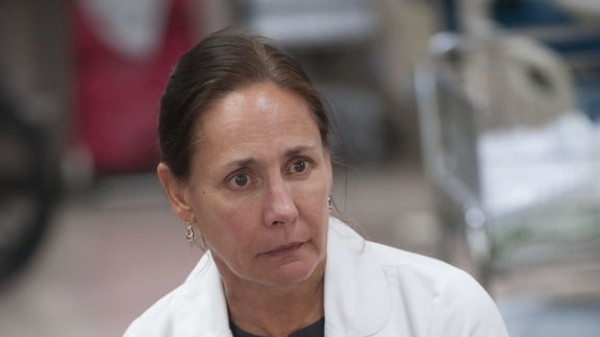 Three-time Emmy winner Laurie Metcalf (Best Comedy Supporting Actress for “Roseanne” 1992-94) could double her overall haul this year as she is back in contention with an astounding three nominations: in the Best Comedy Actress category for her role as Dr. Jenna James on HBO’s “Getting On,” and in both the comedy and drama guest actress races for roles on “The Big Bang Theory” and “Horace and Pete” respectively.

For “Getting On,” Metcalf has submitted the episode “Am I Still Me?,” the fourth of six in the third and final season of this HBO adaptation of the BBC series of the same name.

SYNOPSIS
Dr. Jenna James arrives at the Billy Barnes Extended Care Unit of Mt. Palms Hospital, dressed up and ready to chair a symposium that evening, where she expects to win the coveted Helen Tillman Prize for geriatrics. However, the day goes from bad to worse after she learns that her mother has died. Inebriated and heartbroken, Dr. James comes on to her colleague Dr. Ron Rudd (Grant Bowler), who declines her sexual advances, and then ultimately loses the award to a rival visiting doctor from England.

Can Metcalf add a fourth Emmy to her mantle? Let’s take a closer look at her submission:

PROS
The Emmys are smitten with Metcalf. Besides those three wins for “Roseanne,” she also contended for that role in 1995 and has been nominated three times for Guest Comedy Actress: in 1999 for “3rd Rock from the Sun,” 2006 for “Monk,” and 2007 for “Desperate Housewives.” Now, coming off a Tony nomination (Best Leading Actress in a Play for “Misery”), she reaped three Emmy bids this year, including this unexpected one in a highly competitive category and is a genuine threat to reigning four-time champ Julia Louis-Dreyfus (“Veep”).

She is adept at playing vulnerable characters who get unexpected laughs for revealing their neuroses. As with her character of Jackie Harris on “Roseanne,” Metcalf manages to be genuinely funny while playing the slightly unhinged Dr Jenna James on “Getting On.” In this episode, the actress gives a beautifully layered and nuanced performance as a woman desperate for the respect and admiration of her peers, while also struggling with the news that her mom has died. It’s such an uncomfortable yet effective performance that also delivers just the right amount of laughs.

This episode showcases her perfectly, allowing her to really make an impact by the time the credits roll. Her character is excited about the award she believes she is a shoo-in to win, and then tries (unsuccessfully) to put on a brave face after learning about the death of her mother. At the symposium, she gets drunk while drowning her sorrows and awkwardly dances (like nobody is watching). Empathy is a big factor in any Emmy race, and in “Am I Still Me?,” we feel for her character both as she loses the prize to her snooty English rival and when she is rejected by her colleague after she embarrassingly comes on to him.

CONS
While Metcalf is both funny and heartbreakingly sad in this episode, the show is not a laugh-out-loud comedy. The tone on “Getting On” is not what Emmy voters are used to rewarding in the comedy categories. This is a subtle, underplayed dramedy, with a distinctly British feel. Without a lot of belly laughs, Metcalf might be overshadowed by some of the more conventionally comic performances in this category.

This under-the-radar HBO comedy only managed two nominations this year. That could that be an indication that Emmy voters did not get the show, which has since been cancelled by the paycaster.