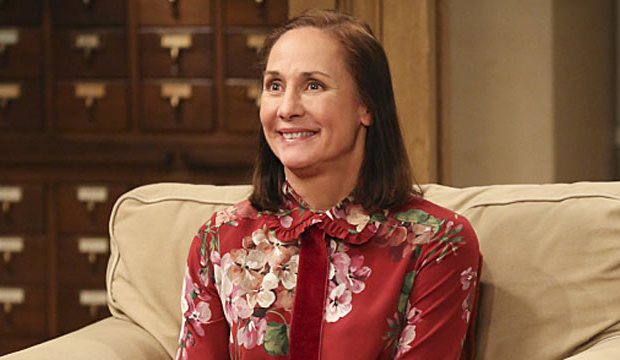 Laurie Metcalf is coming off the kind of year most actors probably don’t even have the nerve to dream about. Not only did she receive a Tony nomination for her Broadway performance in “Misery” (playing the role that won Kathy Bates an Oscar) she also received three — count ’em, three — Emmy bids this year for her work in “The Big Bang Theory” (Comedy Guest Actress), “Horace and Pete” (Drama Guest Actress) and “Getting On” (Comedy Actress). Blythe Danner also received three Emmy nominations in 2005, but add on Metcalf’s Tony nomination and she comes out on top in the awards record books. For “The Big Bang Theory,” Metcalf has submitted the season 9 finale “The Convergence Convergence” to Emmy judges.

SYNOPSIS
This episode starts with Penny (Kaley Cuoco) encouraging Leonard (Johnny Galecki) to have a second wedding since they had a small wedding the first time, and Penny has learned that Beverly (Christine Baranski) was upset about not being invited. Leonard reluctantly agrees and they begin inviting people to the event. Leonard invites his father as well as their usual group of friends while Sheldon (Jim Parsons) being Sheldon assumes he should be allowed to invite people also so he invites his mother (Metcalf).

The fly in the ointment of the get together is the fact that Leonard’s parents are bitterly divorced and continue to throw vicious verbal barbs at each other throughout the wedding dinner. By the end of the evening Leonard’s dad (Judd Hirsch) has struck up a friendship with Sheldon’s mom. After they both get upset with Beverly’s attacks the two leave together for a nightcap at the same hotel they are both staying at, leaving their sons to worry.

Will Metcalf win her first Emmy for this series? Let’s examine the pros and cons:

PROS
Metcalf does have three nominations this year and voters may want to reward her somewhere. Best Comedy Actress seems out since “Getting On” was so low profile and has been canceled. And the Drama Guest Actress race is crowded with past winners and “House of Cards” players.

She won three Emmys back in the 1990s for her role on “Roseanne” but hasn’t been back to the podium since.

While “The Big Bang Theory” has never been able to take the top prize of Best Comedy Series, its cast has done quite well with Parsons taking home Comedy Actor four times (2010, 2011, 2013, 2014) and Bob Newhart winning his first-ever Emmy as Comedy Guest Actor in 2013 (he is nominated again this year).

CONS
Metcalf faces the duo of Emmy-less Amy Poehler and Emmy darling Tina Fey who make Emmy history with their joint bid for co-hosting “Saturday Night Live.” “SNL” hosts have done very well in the past in the guest categories (Justin Timberlake won in 2009 and 2011; Fey in 2009; Betty White in 2010; Jimmy Fallon in 2012 and 2014). The chance to finally award Poehler may be too tempting for voters.

Baranski, Metcalf’s on-screen nemesis, picked up her fourth bid for this role, which could mean vote-splitting.

Metcalf has played Sheldon’s mother on a recurring basis since season one but this is her only her first nomination for the comedy. Why the long wait, Emmy voters?