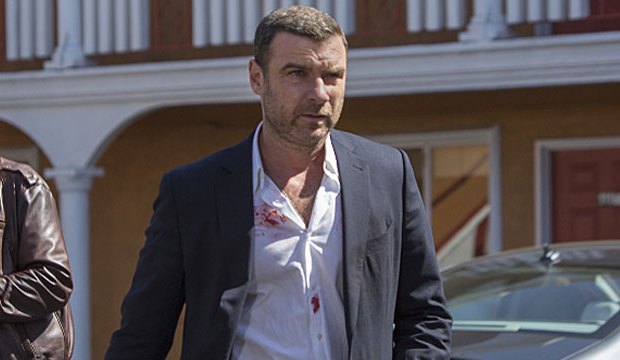 Liev Schreiber, a past contender at the Emmy Awards for Best Movie/Mini Actor for “RKO 281” (2000), shocked many last year when he scored his first Best Drama Actor bid for his work as the title character, a Hollywood fixed, on Showtime’s “Ray Donovan.” He returns to that race this year and is looking for his first victory with his episode submission “Exsuscito.”

SYNOPSIS
After Andrew Finney (Ian McShane) is arrested for murdering his daughter Paige’s (Katie Holmes) husband, the season finale finds Donovan turning his attention toward his family. He arrives home and his wife Abby (Paula Malcomson) and older brother Terry (Eddie Marsh) tell him about the inappropriate relationship beween his daughter Bridget (Kerris Dorsey) and her teacher. Donovan, who was abused as a child by a priest, leaves in search of his daughter. He ends up at his father Mickey’s (Jon Voight) apartment as does Terry, who is shot by members of the Armenian mafia.

In a subsequent shootout, Donovan is wounded. He visits his brother to tell him he was right and doesn’t appreciate his family. Seeing the picture of the Virgin Mary he then goes to see Father Romero (Leland Orser) who excommunicated him earlier in the season, but urges him to pray for his brother. Ray enters the confessional booth and confesses to killing the priest who sexually assaulted him in his youth and the details of how the priest abused him and why he stopped fighting. He then collapses from his wounds.

Will the third time be the charm for Schreiber at the Emmys? Let’s examine the pros and cons:

PROS
Schreiber has already had a great year, sharing in a Best Ensemble SAG Award for the eventual Best Picture Oscar winner “Spotlight.” And with new episodes of “Ray Donovan” airing during voting, he may be top of mind for voters.

Of the six Drama Actor nominees, his episode is the only one nominated for Best Directing, which indicates strong support. See our exclusive webchat right here with “Exsuscito” helmer David Hollander.

Ray Donovan is a stoic character which makes his breakdown in the confessional all the more emotional and heartbreaking. Showing this unexpected side might give Schreiber an edge with voters.

CONS
The episode focuses not solely on Schreiber’s character but the entire Donovan clan. The season finale wraps up several storylines, many not having to do with Ray. Voters will have to wait until the 50-minute mark to see Schreiber at his best.

Also in the race are returning nominees Kevin Spacey (“House of Cards”), Bob Odenkirk (“Better Call Saul”) and Kyle Chandler (“Bloodline”) as well as first-time nominees Rami Malek (“Mr. Robot”) and Matthew Rhys (“The Americans”). Schreiber and Chandler are the only ones whose shows are not up for Best Drama Series. This could put them at a disadvantage.

Schreiber, Chandler and Rhys are the only nominees who did not contend for Best Drama Actor at the SAG Awards, which was won by Spacey.