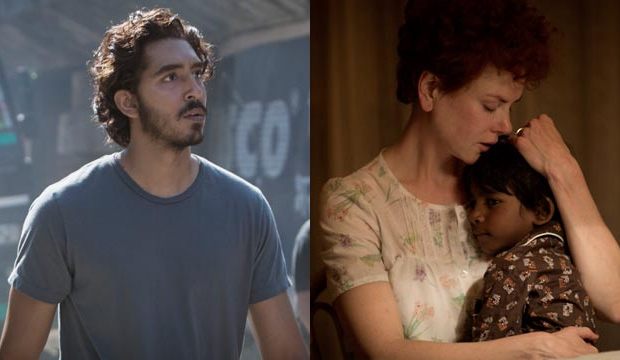 “Lion” opens November 25, telling the true story of an Indian boy who becomes lost and is adopted by a Tasmanian couple, only to return to his native country as a grown man to search for the family he left behind. As of this writing the film has scored 64 on MetaCritic and 78% freshness on Rotten Tomatoes, with critics singling out stars Dev Patel and Nicole Kidman for praise.

Patel had a career breakthrough role in “Slumdog Millionaire” (2008), but although that film won the Oscar for Best Picture, Patel wasn’t nominated for his role. Could he break through this time? His performance in “Lion” is being hailed as “tremendously moving,” and he “exudes all the right kinds of pain here.”

Kidman plays his adoptive mother. She has previously earned three Best Actress Oscar nominations, winning for “The Hours” (2002), but here she “enriches the film enormously” in a “sterling, supportive performance.” If she’s nominated again it would be her first bid in the supporting race.

Dish ‘Lion’ with Hollywood insiders in our notorious forums

Check out some of the reviews below, and join the discussion in our forums.

Fionnuala Halligan (Screen Daily): “This is the kind of overwhelming story that cinema often doesn’t distil very well, but in the hands of Garth Davis (‘Top of the Lake’) ‘Lion’ becomes a dignified, authentic yet highly-moving crowd-pleaser. With knockout performances from Dev Patel, Nicole Kidman and the young Sunny Pawar, ‘Lion’ should straddle both commercial and awards play.”

David Rooney (Hollywood Reporter): “A tremendously moving performance from Dev Patel is the resilient soul of ‘Lion,’ the incredible true story of Saroo Brierley and his tenacious quest to find the family from whom he was separated 25 years earlier. But the role is made even more affecting by its through line from the equally indelible work of Sunny Pawar, the remarkable young actor who plays him at age five.”

Jordan Hoffman (NY Daily News): “‘Lion,’ from Australian director Garth Davis, is ready to pounce on awards season. This amazing true story with remarkable performances by Dev Patel, Rooney Mara, Nicole Kidman and newcomer Sunny Pawar has, like the title would suggest, a blend of brute force and elegance.”

Be sure to make your Oscar predictions. How do you think “Lion” will do with academy voters? Weigh in now with your picks so that Hollywood insiders can see how this film is faring in our Oscar odds. You can keep changing your predictions right up until just before nominations are announced on January 24 at 5:00 am PT/8:00 am ET. Be sure to read our contest rules. And join in the fierce debate over the Oscars taking place right now with Hollywood insiders in our forums.

Nicole Kidman ('Being the Ricardos'): First woman to win two Oscars for getting real?

Oscar Experts Typing: Is there a case for Penelope Cruz to win Best Actress?

Oscar Experts Typing: Kristen Stewart made it, but can she actually win Best Actress?

Best Actress race at Oscars is still too close to call: Olivia Colman vs. Nicole Kidman