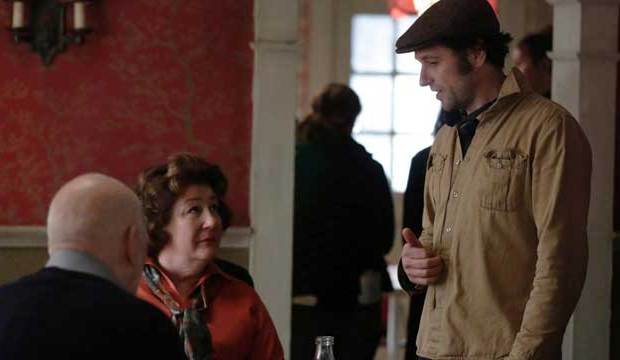 Matthew Rhys earned his first Emmy nomination for acting with the first episode he directed of his FX series “The Americans.” He plays Philip Jennings, a Soviet KGB spy living in America in the early 1980s. It took Emmy voters four seasons to catch on to both Rhys’ critically acclaimed performance and that of his on-screen wife (and off-screen partner) Keri Russell. Both Rhys and Russell have submitted one of the highlight episodes of season four, “The Magic of David Copperfield V.”

SYNOPSIS
The Jennings, a couple of undercover Soviet spies living in suburban America, have hit their breaking point. Their long-term mission has caught up with them as the FBI get closer to discovering who they are. The local informants that they have manipulated to obtain information also begin to weigh on them, including Martha (Alison Wright), the FBI secretary who falls in love with one of Philip’s undercover personas, who is whisked away to Russia, likely never to be seen again. Gabriel (Frank Langella), the Jennings’ KGB handler, decides that Elizabeth and Philip need a break. Broken, battered and exhausted, Elizabeth and Philip take the kids on a vacation to Epcot. The episode jumps ahead seven months, where things seem to have gone back to normal for the Jennings, who are back in the swings of things as KGB agents, having enlisted their reluctant daughter Paige (Holly Taylor) to follow in their footsteps.

Can Rhys win his first Emmy? Let’s take a closer look at his submission:

PROS
Both Rhys and Russell play an ordinary American married couple hiding a big dangerous secret, which hangs in the air on this gripping spy drama. Empathy is always a factor when judging Emmy episodes, and in this one, Rhys shows a more vulnerable side to this secret agent, which actors voting in this category will appreciate. That he also helmed this taut tale might make him even more appreciated by his fellow thespians.

The show’s two leads employ a variety of wigs and costumes because the agents go undercover to achieve various outcomes to advance their cause. It’s a great way for Rhys to stretch as an actor, because his character, Phillip, is himself acting by taking on different personas. Actors will eat this up, appreciating the various layers that make these characters who they are.

The story arc involving Philip and his informant Martha comes to a dramatic conclusion in this episode. The FBI are closing in on Martha, so the KGB decide to send her to Russia. The episode opens with a remorseful and downtrodden Philip seeing her off, as she flies away on a jet into the night. For much of the episode this sense of regret and guilt weighs on him, which comes through on the pained and exhausted expressions on his face.

CONS
Although “The Americans” really broke through with Emmy voters this year with five nominations including for Best Drama Series, there may be a sense that the show still isn’t quite an all-out Emmy favorite.

Rhys’ performance is much more quiet and brooding than his co-star Russell, perhaps lacking the emotional fireworks that tend to win acting awards.