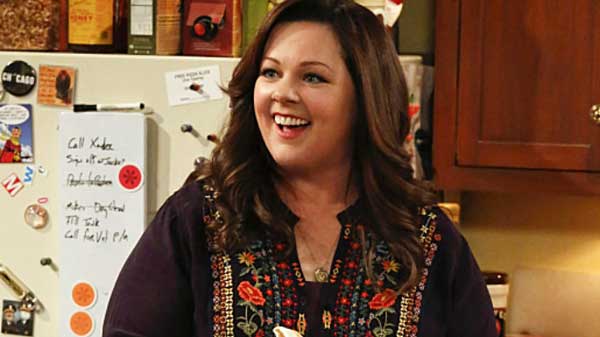 Melissa McCarthy won an Emmy for the first season of “Mike and Molly” in 2011 and could well take home a bookend for the recently wrapped sixth and final season of this CBS laffer. The first episode of the two-part finale that aired on Monday (May 16), “Curse of the Bambino,” would make an excellent Emmy submission.

Molly and Mike Biggs (Billy Gardell) anxiously await to get word as to whether they’ll be able to adopt a baby. It give her a chance to show off her physical comedy skills as she grows more and more impatient. The second episode, “I See Love,” showcases the rest of the ensemble, with each character given a chance to shine as they all await the arrival of the baby.

McCarthy defended her Comedy Actress title in 2012 but lost to Julia Louis-Dreyfus who prevailed for the first season of “Veep” and has owned the award ever since. McCarthy was snubbed in both 2013 and 2015 but did contend in 2014. Can she return to the race one last time?

There are at least three open slots this year with Edie Falco (“Nurse Jackie”), Lisa Kudrow (“The Comeback”) and Amy Poehler (“Parks & Recreation”) no longer in contention. We know Emmy voters like McCarthy as she also reaped nominations in 2012 and 2013 for Best Comedy Guest Actress for hosting “Saturday Night Live.” And with expansion of voting to more members, she could well prevail as they might want to give her one last hug.

However, McCarthy faces strong competition to even get into the Comedy Actress line-up. Besides Louis-Dreyfus, likely returning nominees include Amy Schumer (“Inside Amy Schumer”) and Lily Tomlin (“Grace and Frankie”). Tomlin’s co-star Jane Fonda is among those looking for their first bids as are current Golden Globe and Critics Choice champ Rachel Bloom (“My Crazy Ex-Girlfriend”), 2015 Globe winner Gina Rodriguez (“Jane the Virgin”) and SAG Awards contender Ellie Kemper (“Unbreakable Kimmy Schmidt”). Also in the mix are three of ABC’s funny ladies — Martha Plimpton (“The Real O’Neals”), Tracie Ellis Ross (“Black-ish”) and Constance Wu (“Fresh off the Boat”) — as well as 2007 champ America Ferrera (“Ugly Betty” ) who is back in the running with “Superstore.”