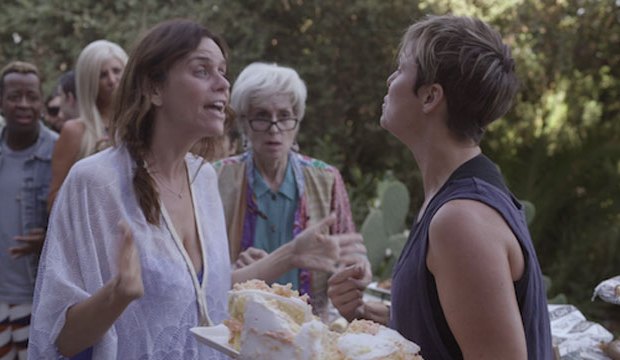 After nearly 40 years in show business, Melora Hardin earned her first Emmy nomination this year for her role as Tammy Cashman in “Transparent.” In the show’s first season, Tammy became romantically involved with Sarah (Amy Landecker), the eldest child of the Pfefferman clan. The second season opens on their wedding, which ends badly when Sarah has cold feet and decides to back out of the wedding. Hardin has submitted the second episode of the season, “Flicky-Flicky Thump-Thump” to Emmy voters, in which Tammy confronts Sarah and her family in a spectacular drunken rampage.

SYNOPSIS
Josh (Jay Duplass) is hosting a pool party for his new band. Josh, Sarah and Ali (Gaby Hoffman) are caught off-guard when Maura (Jeffrey Tambor) and Shelly (Judith Light) arrive at the party together. All hell breaks loose when Tammy unexpectedly shows up at the party drunk after being jilted by Sarah in the previous episode. An enraged and bitterly heartbroken Tammy roars at Sarah and her family, calling them out for being insensitive and self-involved. “I am a beautiful soul, and you are all monsters!” she screams ferociously as she throws the leftover wedding cake into the pool in a final act of defiance.

Can Hardin win her first Emmy? Let’s take a closer look at her submission:

PROS
Hardin’s role is the most challenging and complicated in this category. She plays a masculine lesbian without veering into stereotypes. Actors voting in this category will appreciate the nuances and layers that Hardin delivers in playing Tammy.

Her arrival at the party is explosive. We feel for her (empathy), she is drunk and emotionally shattered (range), and she plays out her pain and sorrow physically through her body language, voice and tears (impact).

Hardin stands out as the apple in a cart of oranges in this category. Her rival nominees are either “SNL” hosts or are playing moms on “The Big Bang Theory,” while Hardin is on an Emmy-friendly single-camera dramedy. She is heartbreaking as a woman on the verge of a breakdown after having been left at the alter by her lover.

While Emmy voters love laugh-out-loud performances in the comedy categories, Bradley Whitford won last year for his role on “Transparent.” And the last three winners in this race were Joan Cusack (“Shameless”), Uzo Aduba (“Orange is the New Black”) and Melissa Leo (“Louie”), who all gave relatively dramatic performances compared to some of their more overtly comedic competition.

Hardin’s veteran status in the industry certainly doesn’t hurt her. Some voters might decide that she is overdue for recognition.

CONS
As great as the show is, “Transparent” is not very funny. Some Emmy voters might be hesitant to check it off in a comedy category.

Hardin is up against some fierce competition. Can she really overcome a bunch of previous Emmy winners, multiple nominees and comedy legends?

Lack of screen time might hurt Hardin. It takes some time before we even get a glimpse of her in this episode. When Hardin finally appears, she only has one (albeit explosive) scene in which to shine, and then we do not see her again. All of her competitors have relatively more screen time than Hardin, and three of them –  “SNL” hosts Tina Fey & Amy Poehler, Melissa McCarthy and Amy Schumer – are very much front and center in each of their respective episodes.