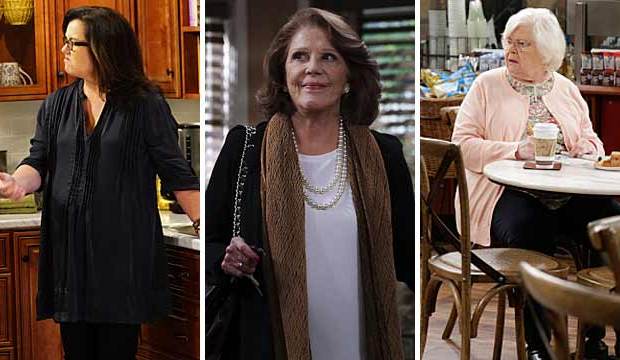 In the past “a lot of sitcoms were based around working-class or middle-class life, like ‘Alice’ or ‘Roseanne,'” recalls Rosie O’Donnell as we chat about her recent appearance on CBS’s “Mom” and how the show hearkens back to classic sitcoms of the past. “Then for a long time sitcoms went into a dreamy Neverland [but] now we’re back to people wanting what’s real again, and what’s real is what sustains us.”

O’Donnell, Linda Lavin and June Squibb all guest starred on “Mom” this season and will be contenders for Best Comedy Guest Actress at the upcoming Emmys. I spoke to them on May 9 in New York City, before they screened their episodes for SAG members.

Will ‘Mom’ tackle Emmy Awards for season 3 just like ‘The Big Bang Theory,’ ‘Two and a Half Men’?

O’Donnell played Jeanine, an ex-lover of Bonnie (Allison Janney) who reunites with her at an AA meeting. “You definitely bring your A-game,” O’Donnell said of working with the cast and crew. “You watch it on TV and see them never miss a beat or laugh or moment of authenticity. There’s nothing fake on that show. Everything is real. And it’s tended to with such precise dedication.”

Lavin agreed. She has a recurring role as Phyllis, whose son (David Krumholtz) is engaged to marry Anna Faris‘s daughter. Said Lavin, “It’s a well-oiled machine. There is nothing they don’t know how to do. There’s such expertise, from the writing to the acting to the design and costumes [and] the humor comes out of the pain and difficulty of their lives, and doesn’t it always? And shouldn’t great comedy always be a relief from pain and anger?”

“Also, they will let it be painful all on its own before you get the comedy. They’re not afraid of it,” Squibb added. She played Dottie, who is mistaken twice for Bonnie’s mother in the third season premiere episode. That episode was particularly emotional because Ellen Burstyn “played the mother that threw [Bonnie] away, and they let scenes happen where there was great pain – and then they did something that was funny.”

In its first two seasons “Mom” has won two Emmys, both for Janney as Best Comedy Supporting Actress. Janney also won twice at the Critics’ Choice TV Awards, where the show also contended for Best Comedy Series in 2015. Now in its third season, can the show expand into more Emmy races this year? It’s created and produced by Chuck Lorre, whose previous shows “Two and a Half Men” and “The Big Bang Theory” broke through with Best Comedy nominations in their third seasons. But if nothing else, “Mom” could stack the deck on the Best Comedy Guest Actress race.