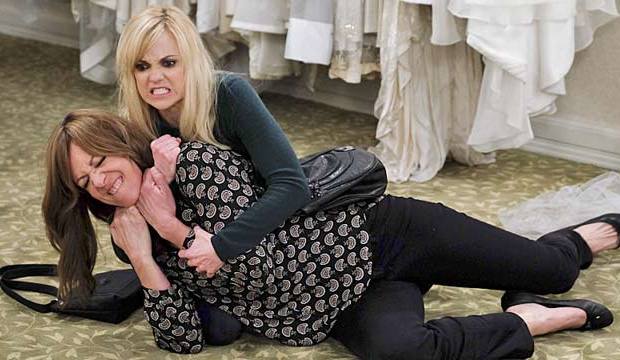 As “Mom” comes to the close of its third season on CBS, it may be poised to continue the Emmy Awards trajectory of producer Chuck Lorre‘s previous two mega hits “Two and a Half Men” and “The Big Bang Theory.” Both of those sitcoms entered the Best Comedy Series race at the Emmys after many years on the air (three for “Men” and four for “Big Bang”), proving that Emmy voters are sometimes late to the party. Lorre’s newest laffer is already on Emmy’s radar, as supporting player Allison Janney recently won her sixth and seventh Emmys in 2014 and 2015.

“Mom” is following the pattern of the other two shows in that academy members first warmed up to the stars of Lorre’s shows before nominating the shows themselves. Holland Taylor and Conchata Ferrell received noms for Season 2 of “Two and a Half Men” while Jim Parsons actually won his first of four Best Comedy Actor Emmys for “Big Bang’s” third season. “Mom” has continued to be a strong ratings hit for CBS this year and Janney’s appeal could also bring focus onto her co-star Anna Faris as well as the show itself.

“Two and a Half Men” and “Big Bang” both had wins in the guest categories for Kathy Bates and Bob Newhart, respectively, and “Mom” could also continue the Lorre pattern of gaining nominations in those races. “Mom” had a particularly strong episode this season where Janney’s character was contacted by her birth mother, played by Oscar, Emmy and Tony winner Ellen Burstyn. Burstyn brought her usual skill and a bit of pathos to the show as the mother who abandoned Janney, while “Nebraska” Oscar nominee June Squibb was quite funny as an innocent bystander who Janney mistakes for her birth mother. Other strong guest stars are Emmy champ Rosie O’Donnell and Tony winner Linda Lavin.

As much success as Lorre’s actors have had with Emmys, it is strange to note that Lorre himself has never won despite eight nominations. However, he was inducted into the TV academy’s Hall of Fame in 2012. Sound off about “Mom” in the comments section below or right here in our famous TV forums.