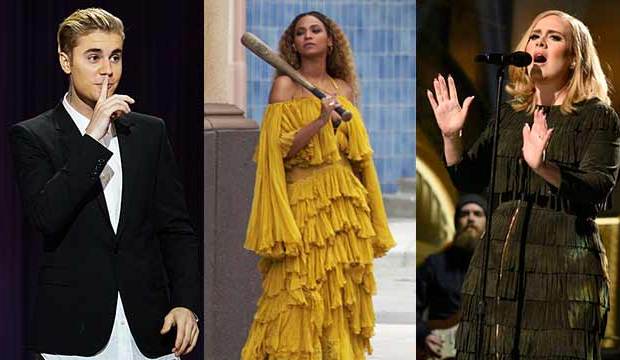 Courtesy of CBS, HBO and NBC

Beyonce and Adele were by far the most recognized artists when the MTV Video Music Award nominations were announced on July 26. Beyonce dominated with 11 bids, including Video of the Year for “Formation,” while Adele is up for eight awards including the top prize for “Hello.” So one of them will be the big winner, right?

Not so fast. MTV may have decided the nominees, but winners are determined by an online fan vote, so even though Justin Bieber only has just three nominations overall his rabid fan base could push him over the top for his hit video “Sorry.” A cadre of young fans likely fueled the recent Video of the Year victories by Miley Cyrus (“Wrecking Ball,” 2014) and Taylor Swift (“Bad Blood,” 2015), so Beyonce and Adele shouldn’t get too comfortable.

Our forum posters have been discussing the Video of the Year contest since the nominees were announced. Read some of their comments below, and click here to join the discussion. Gold Derby’s VMA predictions center will open in the coming days.

Gagamom: Bieber has his legion of fans. Adele has the general public love … It’s gonna be a hard category.

ThisIsNotMyRealFace: Bieber isn’t winning. It’s b/w Beyonce and Adele, same with most (if not all) the categories they are both nominated for. I predict Adele. But it’s a hard one. Should be interesting.

Brayden Fitzsimmons: Bieber and Beyonce have the army of fans. Adele and Beyonce both seem to have the backing from MTV (plus acclaim). Both Drake and Bieber went viral. Kanye has the controversy which rarely does well with big awards.

PoweR: I think Bieber will win it, but I could see it being thrown Adele’s or Beyonce’s way, too.

Jade: It’s between Adele, Justin and Beyonce. Adele is loved by pretty much everyone, Justin has a huge teen fan base, and MTV is obsessed with Beyonce. It could go either way.