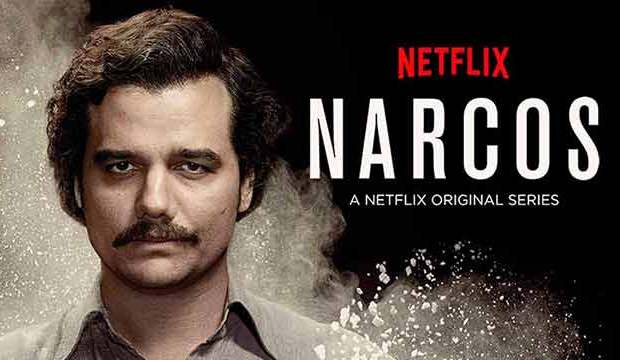 “Narcos,” the Netflix series on the life of narcotics kingpin Pablo Escobar, is nothing if not ambitious. It was the intent of series creators Chris Brancato, Carlo Bernard, and Doug Miro to capture the first 15 years of Escobar’s rise as the world’s most powerful drug lord all of the debut season’s 10 episodes. The show debuted last August on the streaming service and will now be eligible for the first time at the Emmy Awards.

Parallel to the Escobar storyline, “Narcos” also focuses on young American DEA agent Steve Murphy (Boyd Holbrook) who was sent to Colombia to stop the “narcos” (Spanish slang for “drug traffickers”). Despite being a fish-out-of-water, Murphy becomes relentless in his attempts to track down and capture Escobar, played by Golden Globe nominee Wagner Moura.

Which new drama will make the biggest impact at the Emmys:
‘Narcos,’ ‘Mr. Robot’ or ‘Vinyl’?

The Escobar storyline takes audiences into the world of the Medellín cartel — how it was created, how it thrived and how it was threatened. Most intriguingly, it became a character study of Escobar, who started off as a mere smuggler, but through his personal vision, began to build a cocaine empire and became the world’s most infamous drug kingpin. And what’s the next step for the world’s #1 criminal? Politics, of course, as Escobar used his personal charisma and Robin Hood image to run a Trump-like campaign and was elected a Colombian Congressman, all the while still pursuing his nefarious activities. It’s a wild, true story that “Narcos” brings off with great skill.

Though critics have had some grumbles about certain elements of the series, “Narcos” has generally received strong reviews. Brian Lowry praises the “Goodfellas” vibe of the series, noting that, “All told, this Gaumont production is the kind of binge-worthy TV addiction that Netflix was born to import” (Variety). Tim Goodman notes that, “In many ways, this series could end up being the critically acclaimed international breakthrough for the streaming site that ‘Marco Polo’ wasn’t” (Hollywood Reporter). Margaret Lyons adds that, “In addition to being a terrifically solid ten episodes, ‘Narcos’ feels like the most of-its-moment show that any show has ever been — a distillation of the best, or at least the trendiest, aspects of contemporary television and film” (Vulture).

BEST DRAMA SERIES: The reviews have been good enough for consideration, but the 10 episodes of “Narcos” dropped last August. That date, nearly 13 months before this year’s Emmy ceremony, is an eternity leading into awards consideration. However, Netflix has shown with “Orange is the New Black”  and “House of Cards” that it can effectively promote its programs for prizes.

BEST DRAMA ACTOR: Moura’s Golden Globe nod has put him in the Emmy conversation, and there are two available slots for newcomers in the category (with winner Jon Hamm from “Mad Men” and past champ Jeff Daniels from “The Newsroom” gone). Moura has a slightly babyish face even behind a black mustache. When we first see him, we may wonder whether the actor can pull this off. But in a brilliantly-written early scene on a bridge where Escobar confronts the authorities, Moura uses his considerable acting skills to put the fear into his enemies and convince us for good that he IS Pablo Escobar.

BEST DRAMA WRITING: The sixth episode “Explosivos” is arguably its most focused and tightly-written script and earned a Writers Guild nomination recently for Best Episodic Drama. Will the writers who voted for it once remember it again? It’s all about Netflix’s Emmy campaign, but it could happen.