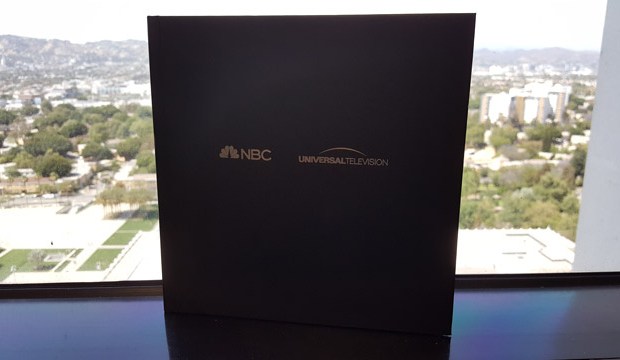 NBC Universal sent a wide sampling of its productions in the 2016 Emmy Awards FYC mailer recently received by Television Academy voters. Inside were programs produced for its own peacock web (“The Blacklist,” “Law & Order: SVU,” etc.), plus other networks like Fox (“Brooklyn Nine-Nine”), A&E (“Bates Motel”), Hulu (“The Path”) and more. The single folder booklet comes with eight discs with sample episodes for each show and a code for voters to access the NBC FYC site and watch full seasons of its contenders on line. See photos above.

Last year NBC Universal scored an Emmy coup with Netflix when its new series “Unbreakable Kimmy Schmidt” reaped seven Emmy nominations, including Best Comedy. Now “Kimmy” is back in its FYC package along with the studio’s newest collaboration with Netflix, “Master of None,” which earned star Aziz Ansari a Golden Globe nomination earlier this year.

Among its own new laffers, NBC is pushing “Superstore” (starring Emmy winner America Ferrera), critical darling “The Carmichael Show” and two now-defunct comedies “Crowded” and “Telenovela.” “The Mindy Project” is among returning programs.

Emmys: TV shows (‘Game of Thrones’) and networks (HBO, NBC) with most wins